Why Iceland Is The Cutest Eurovision Nation Ever Written by Ben Robertson on March 10, 2018 | 1 Comment

As Europe grinds to a mid-winter freeze there wasn’t a patch of snow present on the streets of Reykjavík this past weekend, and it wasn’t just the Gulf Stream keeping it warm. Iceland’s National Final, Söngvakeppnin, has been getting bigger and bigger in recent years and ESC Insight’s Ben Robertson couldn’t resist the temptation to visit.

The sea of flags across the handball court of Laugardalshöll for Söngvakeppnin 2018 (Photo: Ben Robertson, ESC Insight)

I’ve been in plenty of odd Eurovision related events in my time, but on Saturday morning I trekked across the igneous rock covered pavements of Reykjavík into an out-of-town shopping district. I was meeting the President of the Icelandic branch of OGAE, FÁSES, for a round of Zumba to warm up for the evening’s final.

Now I was expecting a small corner office room for such a particular combination of two niche interests, but the music was blaring well into the shopping centre for all to hear. Inside the sports hall was rammed from end to end with a mass of sweaty bodies busting their moves to ‘Kizunguzungu’. 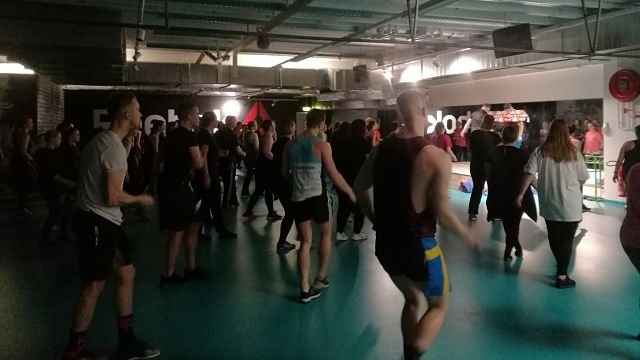 The President of FÁSES, Flosi Jón Ófeigsson, wasn’t just getting involved; he was leading the entire group. With being a hotel manager as his day job, Flosi has also been running the Eurovision Zumba sessions at EuroClub the last two years, but here in Iceland there was a whole magnitude more people than in Kyiv or Stockholm. That post-workout euphoria filled the room with collective glee as everybody demolished the fridge full of help-yourself skyr.

Only in Iceland could they love Eurovision so much.

This Is My Life

It is a well known fact in the Eurovision community that Iceland is officially the country that loves Eurovision the most. Statistically speaking no country comes anywhere close to Iceland’s TV audience share with 95.3 % of people watching television tuning into the Grand Final. That number is from 2016, a year when Iceland didn’t even qualify to the Saturday night show. The bonkers ratio can be partly explained by the lack of competition from other channels in the country of 350,000, and part to the dark Scandinavian winters, but these don’t account for the full nature of Iceland’s loyal viewers.

One unique factor of geography also works in Iceland’s favour is lying on the west of the European continent. That means Iceland is in a time zone one hour earlier than London in May, and two hours ahead of Paris or Berlin. Starting Eurovision at 19:00, with the sun only just setting as the credits roll, very much shifts Iceland to a prime time viewing audience. A family audience at that.

I spotted that later that afternoon in the basement of a different Reykjavík office block at the fan club pre party. Almost everybody in attendance was either a child or with a child. Fizzy pop was flowing, the cute party dresses getting plenty of twirls and some were putting finishing touches on their very handmade signs for the evening’s show. Most Eurovision fan club events across Europe are impossible for children to attend with all the late night dancing and alcohol consumption – but here I had stumbled into the most unique of family celebrations. 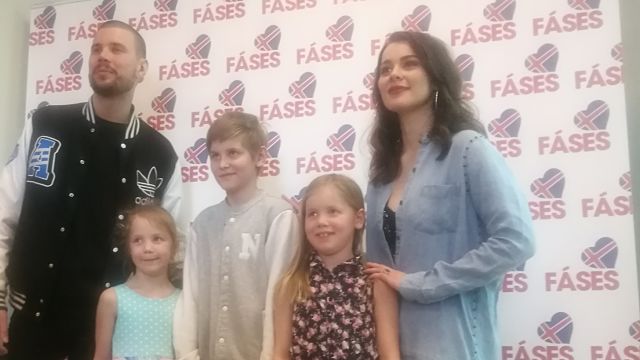 This leads to a second quirk about Eurovision fans in Iceland. According to Flosi FÁSES is the only OGAE member club to have a majority female membership. Part of this may be attributed to the family viewership attracting mothers and daugthers to actively sign up, but also this reinforces what we know about Iceland’s love of Eurovision.

The Eurovision Song Contest is no fringe interest here in these northern reaches. Eurovision dominates the gossip columns, news clips and radio stations many days before and after. Everybody has an opinion.

And also, in a country this small, everybody seems to know somebody involved in some way with the show. That personal connection just amplifies everything above to crazy heights.

Flosi is keen to showcase how much the fan club in Iceland is different for having such a good working relationship with so many influential people. Artists flock to them for interviews and promotion, rather than the other way around. Newspapers are bombarding their members for interviews and on the day of the Söngvakeppnin final a one page spread in the Icelandic paper Visir covers just what FÁSES are doing to celebrate.

However the real relationship Flosi was most proud to talk about was with Icelandic broadcaster RÚV.

“RÚV are realising that we are a great asset. We have now a much bigger arena and they realise we are the people who support all the acts and wave our flags. We love the balloons and spectacle of Melodifestivalen and they listen to our comments.” 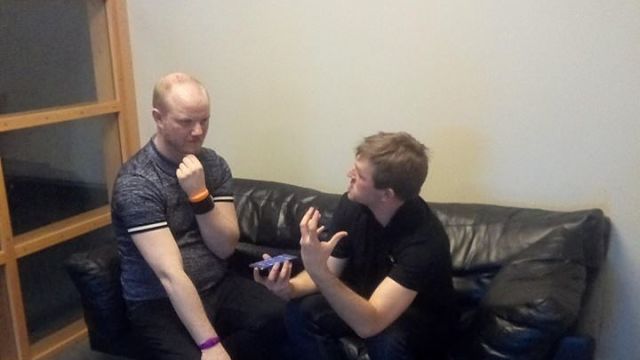 In conversation with Flosi before the final of Söngvakeppnin (Photo: Alison Wren, ESC Insight)

“They approached us after the semi final and told us how great an idea bringing the Icelandic flags were.  Hopefully in the future we will be in a position where we (OGAE Iceland) can be a part of the decision making process of who to send to Eurovision as is already happening in Denmark and Slovenia.”

There are a few things to point out here. The much bigger arena gives Iceland the highest ratio of live audience members to population anywhere in Europe, with over 1 % of the country able to squeeze in Laugardalshöll, an arena most commonly used for handball. Secondly that Melodifestivalen comment is not just a throwaway response from a Eurovision fan, it is a direct part of Icelandic culture too. RÚV have a history of actually broadcasting the Swedish extravaganza, and the year both finals were on the same night Melodifestivalen was recorded to broadcast straight afterwards.

That explains the room full of Zumba dancers knowing the moves to ‘Håll Om Mig Hårt’.

Finally is it the exact nature of that co-operation that is helping give Iceland a Eurovision boost. FÁSES get not just reduced price tickets to the show but also ones in a prime location for all that jubilant flag waving to be centre stage. In recent years Iceland has dotted National Finals around various locations, with budget a decisive factor to move out of the sparkling new Harpa Concert Hall in downtown Reykjavík. This year though ticket sales for even the Semi Finals were sold out weeks in advance and Söngvakeppnin is back as Iceland’s premier TV event once more.

The same sadly can’t be said for Iceland’s Eurovision results.

All Out Of Luck

From 2008 to 2014 Iceland made every single Eurovision final, a stat punctuated by Johanna’s stunning performance of ‘Is It True?’ giving Iceland 2nd place in 2009.

Since then though Iceland have stuttered badly, missing the Grand Final by a distance the last three years. Greta Salóme was closest in 2016 with a disappointing 14th place.

The man in charge of trying to steer Iceland back is Felix Bergsson, Icelandic Head of Delegation. He’s been with RÚV since those good old days of 2011 as a press officer, commentator and assistant Head of Delegation before taking the full reigns in 2016.

Despite the viewing figures, Felix feels ‘a lot of pressure’ on his goal to qualify to the Grand Final.

“I thought we deserved to be in the final the past two years and sadly the tide turned. The party will be better and we want to do it for the artist.

“Our challenge is in getting noticed, we don’t have many friends and Scandinavia doesn’t vote for us automatically.”

Felix has been on numerous international juries this year, as the Melodifestivalen trend of being bringing in fellow Eurovision voices from overseas because increasingly popular. Countries like France and Germany alongside Sweden show the extra level of difficulty in trying to compete side-by-side. Not only do they have closer borders than the expanse of the Atlantic Ocean to the nearest neighbouring country, but also the record labels and professional contacts that stream into their respective competitions. In Iceland foreign collaborations are often limited to those perennial songwriters who turn up in National Finals wherever they may be. 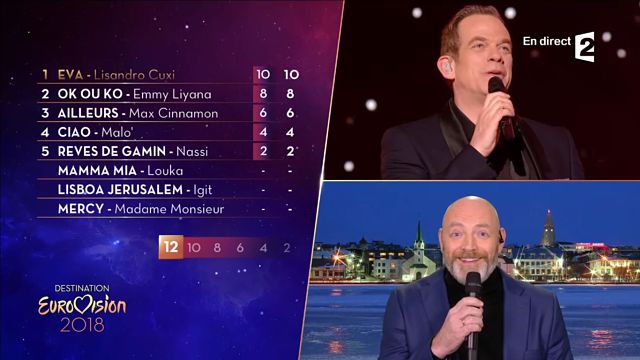 One possible attributing factor is the complicated language rule in Söngvakeppnin. For the Semi Finals all songs must be performed in Icelandic, with artists having a free choice of what language to sing in the Final. However that language choice in the final will be the language the song goes to Eurovision with.

“The reason is that we are making new Icelandic pop music,” Felix justifies. “We want Icelandic songwriters and RUV is the Icelandic broadcaster.”

“For children too, everything being in Icelandic makes it easy to understand.”

The extra barrier in preparing a song for both languages might be offputting for some songwriters or performers to take part. Furthermore this could arguably make the contest decidedly uncool to those who are looking for an international platform with an awkward backward step in the middle. Certainly a critical eye amongst the six competing songs in the Söngvakeppnin Final would struggle to classify any of the six as hip and trendy.

On the flip side though, the majority of acts who reached the final this year were young fresh talent which Iceland is constantly a good breeding ground for. For 16 to 20 year olds at college a competition called Söngvakeppnin Framhaldsskólanna – pitching schools against schools – has cultivated much Icelandic talent. It is no surprise the alumni roll call is basically a who’s who of anybody you’ll recognise from Icelandic Eurovision history. ‘Í Stormi’, eventually toppled in the Super Final after winning both jury and televote in round one, was created from a collaboration of two former winners of said competition.

There is an awkward paradox in Icelandic Eurovision. On one side it is promoting new Icelandic talent and growing the brand locally to never seen before heights anywhere in Europe. However the flip side has led to performances internationally faultering. Ari Ólafsson is the 19 year old artist heading to Lisbon this year after charming the camera lens with tear-jerking emotion from the Green Room, coming from behind to win a tight superfinal. His song, ‘Our Choice’, is a ballad belonging to a Eurovision era before his birth and is currently seen as a very unlikely qualifier where the chance to charm viewers back home will be limited.

However, as family friendly entertainment it is little surprise that those puppy dog eyes stole the crown in the last few minutes of voting on Saturday night. This is a country of family parties and barbeques on sunny May evenings. A country where the fan club pub quiz isn’t held in a pub at all but the conference room of the capital’s LGBT organisation just behind the main square – welcoming all. A country that last qualified with a bunch of multi-coloured pre-school teachers singing about how bad bullying was.

There is a word that defines what the Eurovision Song Contest is to Iceland. That word is cute. It is the kind of entertainment that everybody gets a warm glow inside from. Sadly cute alone might find it hard to qualify in a modern Eurovision of professional juries, PR machines and pop music increasingly defined by expensive production values.

However if they do qualify the celebrations in Iceland will be so joyous only their football team this summer in Russia could beat it.

And for that passion alone, I for one simply wish every country could be a little more Iceland.

One response to “Why Iceland Is The Cutest Eurovision Nation Ever”