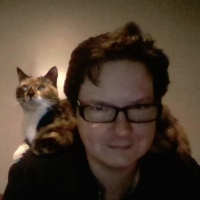 What did 2016’s Eurovision Song Contest mean to the residents of Kyiv? Guest writer Phil Dore looks back on his visit to Ukraine’s capital city and Eurovision 2017.

I’d been to the Eurovision Song Contest before, but 2017 felt different. At Malmö 2013 or Vienna 2015, the Song Contest felt like it could have been in Anywheresville, Europeland. Kyiv felt like it could have been any European city…at first. Then you started to notice that among the commuters getting on and off the Metro, some of those tapping away on their iPhones were wearing military fatigues. There were National Guard recruitment posters on the Metro, alongside the usual ads for laser clinics and apartments. Channel-hop on the TV, and you’ll spot what looks like propaganda between the music and news channels.

A Nation is Made Of People

Given the fairly blatant way Ukraine used nationalist themes to secure their win last year, I was curious to hear what Ukrainians thought of the Song Contest. So, as part of my Eurovision experience, I decided to eschew the fan areas and headed out to an English language conversation group, where locals meet in a bar to practice their English skills.

The language group were perfectly hospitable, seeming to view the influx of foreign visitors as amusing curiosities in a country where the tourist infrastructure isn’t particularly well-developed. That said, they were utterly indifferent about the Contest in their city. One young man commented, “Our politicians are corrupt, we’ve got a war in the East. Eurovision doesn’t change our lives. Anyway, I can’t afford the tickets.”

If Jamala’s win was supposed to spark off a wave of national pride, it certainly hadn’t had that effect on him.

Even going to the bar reflected his general sense of resignation about the state of his country. “Can you recommend me a good Ukrainian beer?” I asked him. “Oh, there’s no good Ukrainian beers,” he replied. “Our beers are bad.” Despite his warning I ordered a pint of the local brew, which turned out to be as cheap and as good as you’d expect.

They asked me about Brexit. “Ukraine wants to become part of the EU! Why would you want to leave?” I replied that, in my opinion, there weren’t really any good reasons, other than idiotic nationalism taking us down a foolish path. They assured me that as Ukrainians they understood this problem.

I ordered some more beer, and we exchanged more cultural insights. One guy told me that he had worked as an interpreter for British journalists in Ukraine. When I asked which news agencies, he mentioned the BBC and the Morning Star. They seemed very amused that Britain had a communist newspaper. “Oh yes,” I said, “You see it in all the shops. I never see anyone buy it though. I have no idea how they manage to stay in business. They can’t be making any money from it.”

A woman wondered out loud if the paper was a front for money laundering. Maybe this isn’t the first thing a Brit would assume, but Ukraine is unfortunately something of a hub for financial scams. To a Ukrainian this would be a natural conclusion to draw about any business that seems to stay afloat despite not seeming to turn a profit. “In Ukraine,” she told me, “We are specialists in money laundering.”

The English language group seemed appreciative that we’d taken the time to come along, even if they were a bit bemused at the idea that anyone would choose to come to Ukraine for a holiday. We wished them goodnight and headed back home to sleep off the beer.

Eurovision week coincided with VE Day, which meant that on the Monday and Tuesday the Eurovision logo in the Maidan was crowded out by memorial poppies and billboards of World War Two heroes. A few yards away, the Independence Statue was plastered with photos of Ukrainian soldiers killed in the ongoing conflict. Across the street was a burnt-out building from the 2014 Euromaidan Revolution. The ruins of the building were covered with a giant awning proclaiming, “Freedom is our religion”.

Further up the road was a reminder of more recent struggles. The People’s Friendship Arch had been covered in the colours of the LGBT rainbow for Eurovision week, but the covers were noticeably incomplete. Work had begun but then halted due to protests from the far-right, leaving the arch only partially re-coloured – inadvertently perfectly symbolising the incomplete nature of social progress in Ukraine. 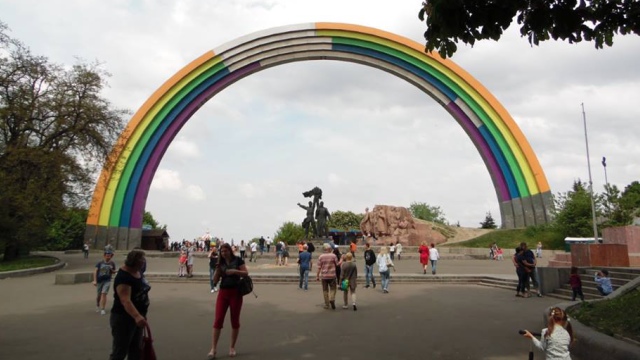 On Thursday, I bumped into a familiar face as we queued to enter the arena for the second Semi Final. It was one of the guys from the English language group on Monday night.

“I thought you weren’t interested in the contest?” I asked.

“They dropped the prices,” he replied, “So I decided to check it out.” He still seemed rather non-committal about the event, but said he liked the fact that NAVIband were singing in Belarusian. He wandered off in the direction of the fan zone. From the cheers in the crowd later that afternoon, it seemed clear that he wasn’t the only Ukrainian in the crowd who appreciated their neighbour’s decision to sing in their own language.

Later that day I caught up with him again, and asked him what he thought of the show. He replied, “I liked…the stage..I liked….the lighting…” I guess he hadn’t been totally converted, but at least we’d made a start?

On the Saturday night we watched the Grand Final on a big screen at the Eurovision Village, just a few hundred yards from those burnt-out buildings on the Maidan. Behind us, a group of Ukrainian teenagers whooped and cheered. The guy from the bar on Monday may not have been totally won over to Eurovision, but these kids were clearly having the time of their lives.

One of the teenagers asked me, “Were you not afraid to come to Ukraine, because of the war?”

“No,” I replied truthfully. “Donetsk is a long way from Kyiv.”

“But Ukraine is a small country,” she said. I assured her that the UK is even smaller. Besides, if they weren’t afraid to come out and party, why should I be?

As with the language group from Monday, the teenagers seemed intrigued by our presence in our city. Between songs, they quizzed me on what I thought of the country. Had I tried the local food? Had I eaten salo? I replied that I hadn’t, though I’d enjoyed a big plate of varenyky.

They cheered loudly for Belarus and Moldova, apparently as much out of solidarity for their neighbouring countries as in appreciation of the songs. They were a little muted in their cheers for Ukraine, freely admitting they’d never heard of O.Torvald and would have preferred Monatik as the entry. As the show ended, I told them to send Onuka in 2018.

Ukraine is a country that has been through many difficult times, with recent years being no exception. The preparations for the Contest itself also went through a number of difficulties. Despite these, Ukraine put on a great show. Although many Ukrainians feel disillusioned about the state of their country, I hope they will feel proud of Eurovision 2017 and their music.

About The Author: Phil Dore

Phil Dore is a nurse living in Cardiff, UK, who uses the Eurovision as a vehicle to indulge his twin loves of music and travel. He can be found on Twitter at @PhilJDore banging on about liberal politics, and at @sirhatSM imagining he's Serhat. Don't ask why he does that. He just does.

One response to “Diversity, Disillusionment and Dancing In Maidan Square”