Nine Things We Expect From Portugal And Eurovision 2018 Written by Ewan Spence on May 15, 2017 | 9 Comments

As the tech crews break down the Eurovision stage in Ukraine, the circus gets ready to move to Portugal for 2018. Ewan Spence looks forward to what we could expect to see from broadcaster RTVP and the Atlantic facing country.

Need we say more, apart from the idea of a Euroclub on the beach?

The One And Only Choice

When you think about the additional requirements from a venue – to be near good transport links, to have a large hall suitable for a modern show, extra space for the press centre, delegation facilities, a handy supermarket – it feels like there is only one choice. Step forward the MEO Arena in Lisbon (and yes that means we not looking beyond the capital city).

Its Atlantic Pavilion was designed to bridge the gap between a handful of 4,000 seater theatres and the larger open-air sports arenas. I mean, who would ever consider building a custom-designed venue on the coastline suitable for major music events with press facilities next door…. 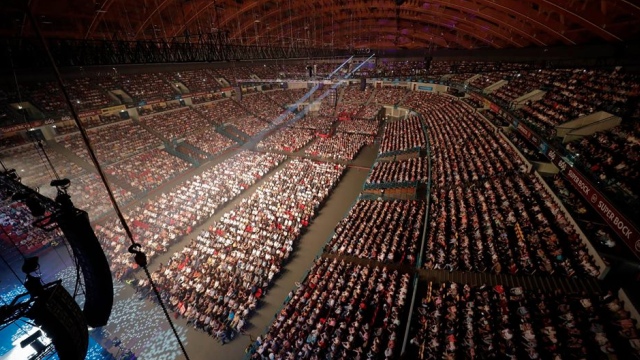 Both Stockholm 2016 and Kyiv 2017 have seen winning songs performed in the performer’s first language. All of this year’s non-English songs appeared in the Grand Final in Ukraine with three of them placing in the top ten. The Eurovision tendency to draw influences from previous winners will no doubt come into play, so expect to hear a lot less English being sung in 2018.

The Swedish pop formula is far from played out in the mainstream, but its influence at the Song Contest is not as powerful as it was just a few years ago. It’s still a safe bet to make at the selection stage (witness Cyprus this year, and of course Sweden itself) but in the push to stand out the uniformity of the Swedish sound (arguably the Max Martin sound) is going to be a drag on a song’s potential performance.

PS: Go and read this interview with Martin, we’ll wait for you…

The expectation is that Russia will be returning to the Contest (much as Armenia made an immediate return in the year after Azerbaijan’s hosting, and Portugal after sitting out the trips to Stockholm and Malmö) but I wonder if the EBU will want to have a little discussion before the doors are held wide open. The threat of repercussions at next month’s Reference meeting are hanging over Russia and Ukraine, so it’s not going to be a smooth return.

San Marinese broadcaster RTV has indicated that the micro-state will not be entering again because it believes it is impossible for smaller broadcasters with minimal budgets to qualify. I think Moldova would have something to say about that, but if 2018 will see a swing towards jazz (see above) then to deny Valentina Monetta the chance to do her best Diana Krall would be unfortunate.

Italy failed to win this year’s Eurovision Song Contest, even though it sent the biggest Italian hit of the year, the conquering hero from Sanremo 2017, and the winner of the Sanremo Newcomers award in 2016. ‘Occidentali’s Karma’ racked up a record-breaking volume number of YouTube viewers ever for an official video, and significant levels of international recognition.

Yet Gerald and Gabbani failed to stick the landing. With so much pre-Contest hype the feeling of defeat will leave a bitter taste. Where RAI take Eurovision next is something I am very curious to find out, but the delegation should be happy that the market share and audiences on RAI1 are climbing.

The last few years have seen a distinctly Swedish tone to the production, both from hosting duties and the support offered by members of the SVT team to the various productions.  The Eurovision Song Contest is a big beast, and the baseline for the production naturally builds on the last few Contests.

Much as the SVT model is a safe one, I want RTP to make sure this feels like a Portuguese production, to take creative risks, and not simply present a Portuguese impression of a Swedish production.

Although Kyiv is a gorgeous city and destination, more members of the extended Eurovision family are likely to travel to Lisbon to take in Portugal’s capital city both as a holiday destination and a Song Contest with a sunny climate.

Thankfully the MEO has a capacity upwards of 20,000 in its regular configuration. Eurovision’s backstage requires a bit more space than Black Sabbath’s reunion tour, so trim that number back to around 15,000 or so. That still leaves a lot of capacity but it will be a scramble for tickets.

The Year Of Sasha Bognibov… Please?

Because every season has some Sasha in it. The first question is whether he’ll sing about circles of light, stopping all the lawyers, or tending to a Wounded Swan. The second is if he will make the televised rounds in Moldova. And then…

Okay ‘expect’ is possibly too strong a word for the idea of the Bognibov Bandwagon rolling up in Lisbon, but we always expect him to try.