A Taste Of Kyiv Written by Sharleen Wright on May 2, 2017

As everyone settles into Kyiv after a few days, Sharleen Wright looks at the experiences and what you can expect if you are travelling to the Eurovision Song Contest 2017.

Three days into the Eurovision Song Contest rehearsals, and as we have come to expect from Ukraine, in the bigger picture everything is running smoothly (we have our desks, power, wifi, and the usual press centre requirements covered), but the finer details of actual delivery and niceties tend to fluctuate or are not quite in place yet.

Whilst the first week tends to just be very much the ‘Eurovision Fan Press Bubble’, Ukraine works on the principle that things will all be fine and delivered, but maybe close to the wire and not always within the naturally expected common sense and clear information we have come to expect of the Western-held contest of recent past years.

Want to collect your accreditation pass?  Well, as some experienced on Saturday, you might need an accreditation pass to enter the accreditation centre.  Don’t worry – the rules will change again in 10 minutes. There is nothing inherently wrong with the approach, it’s about the finessing – especially when you have an event that covers 42 participant countries and a very diverse population of different languages, ages, abilities.

More important for those that are ‘tat-driven’ (let’s not beat around the bush, they do exist), the beloved ‘Eurovision Press Bag’ is still missing in action. This has earned Eurovision 2017 the rather amusing nickname amongst our gang as ‘Euro-Casablanca’ – “maybe not today, maybe not tomorrow, but soon…”

Clearly this is not Stockholm and we don’t want it to be.  Be patient with Kyiv, you will eventually get what you came for.

And let’s not forget Casablanca turned out to be a classic.

Landing into either of the two airports of Kyiv, you will be greeted by multiple forms of signage. Approaching the immigration counter with any passport other than Ukraine will inevitably lead to the first question “Are you here for Eurovision?”.

Very few people have experienced any issues of entry, although Australians arriving without visas yet will need to be prepared for a lengthy wait. If this is indeed your situation, maybe pack a bottle of water and a snack from the departure airport to fill the gap whilst you wait.

Journeying across town between accommodation and Arena, you will inevitably see the start of the beautification of the city – areas of greenery, new paving, resurfacing of roads. In this respect, we are kindly reminded of the 2012 Eurovision hosting in Baku; right down to the derelict buildings across from the arena being quickly covered by tarps, and hiding the true nature of its Soviet past.

We saw them struggle with the concept of what it is as a nation when last here in 2013 for Junior Eurovision, and its journey towards looking West slowly continues. It’s demonstrated through its bidding process, calls for transparency, to more everyday sights like the crazy ‘Mafia’ chain of restaurants promising that ever-so-natural melding of Italian and Japanese cuisines in a 24-hour establishment.

The Ukrainian National Information Agency is also on the bandwagon of reaching out to appeal to the Western audiences and reflecting its past, offering attending journalists an alternative co-working /chill-out space called ‘Arthub’ closer to town, coupled with cultural activities. Across the calendar, it will host a Ukrainian Fashion Day (4 May), photo exhibitions, lessons in Crimean history, and even a hands-on Ukrainian Cooking class where attendees can learn to make and then sample varenyky (dumplings – 12 May).

The striving and mix of old and new, East and West mentality and delivering is perfectly demonstrated through this very photo. 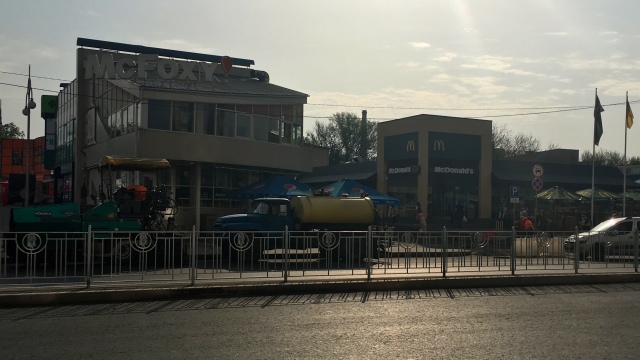 We bring you that defining brand McDonalds sitting literally next to its Ukrainian rip-off – McFoxys.  We’ll let you know later how the two burgers compare… once we send Ewan in to do the test.