Joy And History: The Centre Of Norway’s Grand Prix Contest Written by Ben Robertson on March 2, 2016

With three top ten placings in a row and a record points scoring victory, Norway is one of the more successful nations in recent Eurovision history. ESC Insight sent Ben Robertson off to their National Final, Melodi Grand Prix, to see if he could find its winning formula.

The view from the top of Oslo Spektrum (Photo: Ben Robertson)

It’s very easy to forget how small Oslo actually is.  Norway’s economic and political strength outshines the population of under a million people in a capital city for a nation only five million strong. There was a small town feel to all things associated with the Melodi Grand Prix circus. The night before the Final a side wing of the local Hard Rock Cafe was taken over by a bunch of OGAE Norway for a pre-party. Nothing unusual in this, except that many of the acts competing the following night popped along to meet the fans, sing a little bit, and tour each corner of the bar for selfies.

It’s a far cry from neighbouring Sweden and Denmark, where there’s an extra sense of media frenzy about the acts in question that would make such a night impossible. Yet the acts here in Norway are not nobodies, the winning artist Agnete turned up despite making herself celebrity status after a whirlwind success on ‘Let’s Dance’ in 2014, and second placed Freddy Kalas is racking up the Spotify streams in the millions. On one side of the coin the Norwegian extravaganza felt akin to attending Latvia’s Dziesma 2014 in Ventspils or Albania’s Festivali i Këngës inTirana, such was how incredibly down-to-earth everybody was.

You wouldn’t necessarily notice this somewhat humble attitude watching the show. On arrival at Oslo Spektrum on the Saturday we met one of the most beautiful National Final stages I have seen. A curved LED wall was simple yet effective, the satellite stage used to give a great sense of distance and the lighting across the entire venue added energy that multiplied the crowd of just a few thousand. Couple to this Spektrum itself, a cavernous National Final venue which hosted the Eurovision Song Contest twenty years ago, with steep banks creating an echo chamber underneath the stage, and you have the opportunity for magic. 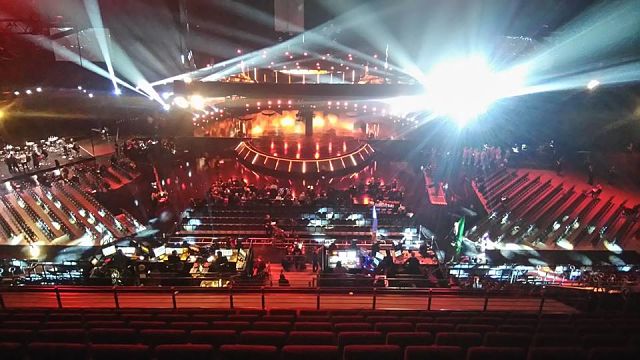 The sound bounces all around the Oslo Spektrum (Photo: Ben Robertson)

Another focus point here is the staging which is ramped up to Eurovision levels, perhaps even beyond. Before the show I spoke to Mattias Carlsson, show director, who spoke me through some his vision behind a successful Melodi Grand Prix.

“I have a vision for each song and for each number. For me the important thing was to make the show for the people. It should look rich and expensive. I think it does and, yes it is expensive. I think it’s important to make each act follow the music, can I put it in that modus on stage, for example with a rock song feeling like we are in a rock arena for those three minutes.”

The utilisation of props Mattias used to deliver this is beyond the wildest dreams of most broadcasters. Many of the acts feature casts of dancers in double figures, far more than the six-person limit at the Song Contest, and even 250-1 outsiders are given a firework curtain a la ‘Only Teardrops‘ in a bid to stand out above the crowd.

“We have to change our acts for Eurovision. The limit is six people on stage and here we don’t have any limits. I want it to look rich, lots of people, big acts. And then I have to redo it for Eurovision.”

This type of TV is expensive. So much so in fact, Mattias was completely upfront with me about the limitations of his vision. The Melodi Grand Prix tour, which took Semi Finals across the country Melfest-style was ditched in 2013. Cost was the main reason for its discontinuation, Mattias confirmed. Running all the Semi Finals in one theatre back-to-back in 2014 did not prove popular, so in 2015 the one-shot National Final returned to Norwegian television. Despite this upheaval in format, the quality behind the final show remained high, as did the performances in Vienna.

Given the financial constraints, ticket prices for the show are comparatively low. All tickets were under 500 Norwegian Kroner (£40), making it the same price as the 2016 UK National Final and half the price of floor level seats for this year’s Melodifestivalen Semi Finals. When you consider the infamously high standard of living in Norway it’s easy to argue national broadcaster NRK are selling tickets well below the market rate.

Tickets to the Norwegian final cost less than a round of beers (Photo: Ben Robertson)

Comparing To The Big Brother Next Door

Melodifestivalen is something Mattias knows more than a fair bit about. A native Swede, he moved to Norway 15 years ago and has worked on six editions of Melodi Grand Prix as well as three Eurovision Song Contests and last year’s Melodifestivalen. The producer-decided running order for Melodi Grand Prix had a decidedly Scandinavian feel. The ten songs were split into two groups of five, starting with party tracks and ending with iconic performances sandwiching your straight-up pop and disney ballads in the middle.

For a Swede to be in charge of one of Norway’s biggest TV shows is a lot of pressure. Certainly the ideas such as going on a cross-country tour or sign language interpretations of the performances are carbon copied from the big brother to the East, but the Norwegian mentality to Eurovision is just a little bit different.

Despite recent successes, Norway is just as keen to remember their record of 11 Grand Final last place finishes. Jahn Teigen, the ultimate nil points scorer in Eurovision history, got his interval act glory this year to celebrate one of his songs not even fit for the Song Contest itself. Looking back on Norwegian Eurovision history with a fond smile is a part of the job, as Mattias explained.

“Melodi Grand Prix is joy and it’s history. This competition is over 50 years old and people should be proud of it and enjoy it. To make the new audience feel that this is our night every year and collect all the families together and enjoy the show.”

On paper, this sounds like the recipe for Sweden’s spectacle, but in Norway the approach gives a far more homely outcome. On the same night as Melodifestivalen had a National Final where the lyrics to the national anthem were tweaked and we were ‘schooled’ in how to sing ballads, Norway offered interval acts full of straight-forward nostalgia with their beloved stars of yesteryear. This wasn’t just family friendly TV, it was with extra emphasis towards tradition, allowing families at home to educate their children.

It seems to have been a success. Viewing figures were the highest since 2010, and all four superfinalists catapulted themselves to the upper echelons of the iTunes charts, while Freddy Kalas keeps his reign over the Spotify market. Norway might have to play at being Sweden’s little brother at times, but consistently there is a good and marketable product without too much scandal or drama.

Where Now For Melodi Grand Prix?

That Melodi Grand Prix turned out to be a success was in some way a little surprising. Maybe I expected too much of the Melodifestivalen circus to slam into it, but some of that understated feel might have left to missed opportunities. There was no rush for tickets in the cramped Oslo Spektrum, with some available even after all the songs were released. The press coverage of the show was low key, with Sunday morning newspaper coverage of the show relegated to the culture sections rather than splashing the front pages. After the show all the artists awkwardly mingled in the press area until nobody else spoke to them, but sadly no interval acts, songwriters or anybody else within the show got the chance to mingle. This lead to the post-results press being focused rightly or wrongly on who won, but NRK missed the chance to carve out other perhaps more captivating stories. 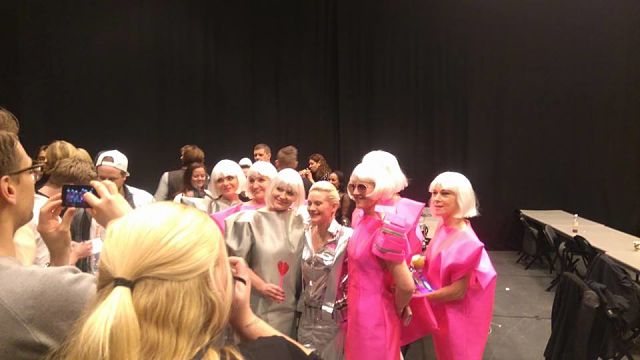 As a show itself the production was world class and NRK could not be faulted on how they gave each song a unique chance to shine. What could be critiqued though would be the quite obvious shoe-horning in of different genres. In a ten song field there was little need for two Disney ballads or songs describing themselves as ‘modern dansband’ which were anything but modern. Yes diversity in a family show is incredibly important, but the genre spread here feels like taking a sample from each plate, regardless of produce quality. With over a thousand songs submitted, more competitive pop acts would be appreciated so you were not ending up with a superfinal where all the pop songs qualified leaving the voting sequence a drab and predictable washout.

However this misgivings are minor. The Norwegian show is in the Premier League of Eurovision selection formats, and delivers such a high quality production that each winning song already has strong staging concepts in place to utilise in Eurovision. If the money conundrum does find itself improving, NRK’s desire to spread the show around the country again still exists and it can bring not just more music but also more culture across the nation.

Like last year demonstrated, where the 50th anniversary bringing back the orchestra to the competition, NRK can and will take broadcasting risks that add to the show’s appeal. With the winning song this year breaking conventional rules of pop with its tempo change, it continues a trend of Norway’s Eurovision offerings bringing something fresh to the table. Long may it shine as a beacon for how to deliver excellent entertainment and showcase brilliant new music.