ESC Insight Asks: Who From Junior Should Be Promoted To First Team Action? Written by Ben Robertson on November 5, 2015 | 1 Comment

Which former Junior Eurovision artists do we want to see on the Eurovision stage? The team discuss their favourite picks to go from mini-star to superstar.

A little guilty secret of mine is that despite the Danny vs. Loreen saga that took place inside Globen during Melodifestivalen 2012, it was my first while living in Sweden and my over-excited self voted for somebody else. It was the faultless and heartbreaking performance from Molly Sanden, Sweden’s Junior Eurovision representative from 2006. It left me mouth wide open in awe at her powerful yet tender voice.

Molly’s transformed image from her innocent youth to one with ever changing hair colours and feminist statements is a world away for the flowing white dress and locks of hair Junior Eurovision fanatics remember. Her latest EP features ‘Satellites’ which would get any party started alongside the massive track ‘Phoenix’ (written and produced by ‘Heroes‘ co-composer Anton Malmberg Hård af Segerstad) and huge hit ‘Freak’, a masterpiece of her balladry skills. Molly isn’t just the next Sanna Nielsen, she’s ready to take the crown off her now.

However this question is wasted on Sweden; we really need to look at countries where their Junior tradition is strong and the Eurovision Song Contest entries need a lift, not the opposite like in Sweden. The answer to this question has to be twice Junior winners Belarus, who have only finished once in the Top 15 of the Song Contest.

I’m looking past their two winners though to highlight young Lidiya Zablotskaya, who finished 3rd in Junior Eurovision 2011. Not only was her voice angelic, but how Lidiya performed to the cameras was natural, engaging and vote grabbing. Lidiya’s name would be exciting, as an adult can she take her vocals and charisma up to the next level and charm a whole continent once more? I feel Belarus needs something fresh and she would be the most obvious solution to the equation.

Confession time – although I’m looking forward to joining the team in Sofia next month, I’ve not really been what you’d call an active follower of the Junior Eurovision Song Contest. In fact, I haven’t tuned in since the very first one back in 2003, which in all honesty I found to be pretty dreadful. When the UK pulled out two years later, it was very easy to lose touch with the Contest, and frankly I was a little surprised when I started to become active in the fan community around 2012-2013 to discover that Junior Eurovision was even still going at all.

I did watch the Contest last year, and while I still have my reservations, I was struck by how far the contest had come from the ill-conceived and amateurish display I sat through a decade earlier. Some of the songs could easily have ranked alongside the entries that went to the adult contest. I was particularly struck by Bulgaria’s Krisia Todorova, who I thought had a really excellent ballad and performed it very well. At 11, she’s still a way off stepping up to ‘real’ Eurovision, but if she continues to develop her craft and work with talented songwriters, she could well do her country proud a few years from now. 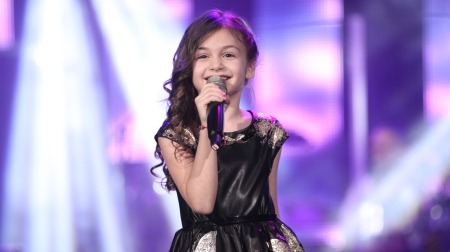 In another example of my JESC blind spot, I’d entirely forgotten that Molly Sanden was even in it! Now one of Sweden’s most popular young performers, I’ve loved her most recent singles which really are of international calibre, even if she hasn’t quite scored that breakout hit she seems to be searching for yet. She was lost in the shuffle in her previous two Melodifestivalen appearances but if she entered again in the next couple of years, I imagine she’d be a strong front runner.

I look back at ‘Shine‘, and the graduation from Junior to Adult by The Tolmachevy Sisters as a misfire. Not because of the quality of the song (I still love ‘Shine‘ to this day, but I prefer the Russian language version) and I wouldn’t want to take the experience away from Anastaysia and Maria, but Russia has far more depth on its Junior bench than the Spring Jazz Twins.

Take Lerika. Not only does she have the advantage of two appearances at the Junior Eurovision Song Contest for two different countries (Moldova and Russia), she captured the changing moods of Junior. The Moldovan appearance in 2011 with ‘No-no‘ captured the innocence that can drive many Junior Eurovision songs, while the Russian appearance in 2012 with the significantly more Euroclub friendly ‘Sensatsiya‘ showed a maturing artist with a confident stage persona and a team that could write an epic crowd pleaser.

Shame about the camera angles though.

That said, Lerika can claim dual nationality and sweep the board in any Moldovan National Final. If I had to nominate a pinch hitter from Junior to Adult, I’m going with Katya Ryabova. The first performer to return to Junior Eurovision for a second appearance, representing Russia in 2009 with ‘Malenkiy Prints‘ and then in 2011 with the perfect earworm of ‘Kak Romeo i Dzhulyetta‘. The package is there, the team is there, and dare I say it the maturing attitude is there as well.

Russia currently takes great delight in sending the ‘pixie girl’ style singer to the Contests in May, and Ryabova could arguably fit that mould, but with far more aggression than Polina Gagarina, The Tolmachevy Sisters, and Dina Garipova.

Stockholm needs a bit of aggressive pop with attitude, and I’m sure that Ryabova and her team can deliver.

Molly, Lidiya, Lerika – my colleagues have already name-checked my first thoughts on who I would love to see at the Adult contest.  Lidiya in particular brought a sense of maturity and pure class to the Junior Contest for Belarus that is sorely lacking in a good deal of their previous Adult acts.  She shone on-stage with her power-ballad, and I clearly remember leaning over to Ewan at the rehearsals in Yerevan in 2011 professing my wish to see her graduate to the bigger contest.  She’s 17 now, perhaps we’ll see her in the next Belarussian national final? Fingers crossed.

Also from the same great vintage Junior year, we had a spunky young lad by the name of Ivan Ivanov representing for Bulgaria with his song ‘Superhero’. He managed to sing both solo and in tune, whilst also pulling off some daring jumps and dance moves; something that even Swedish heart-throb Eric Saade was unable to do in tandem at the Adult contest earlier that year (and he still managed a 3rd place).  With Bulgaria back at the more senior contest in 2016 after some time away, wouldn’t it be great to have the young Jon Bon Jovi step-up with a funky Adam Lambert-esque pop contribution and see the country through to its first Saturday night final performance since 2007?

And needless to say, with Junior Eurovision hosted in Bulgaria this year, and Ivan turning 16 next year, I really don’t think we’ll have long to wait until we are reacquainted with his talent.

Just like attending my first Eurovision or my first National Final, my first Junior Eurovision experience last year gave me a whole new perspective on something that I had only seen through my computer screen. I learned first-hand how JESC goes beyond a bunch of kiddie songs performed by marionettes, with strings pulled by overbearing helicopter parents. These singers go beyond what their ages would suggest, and in more than just music. The kids that you see on screen aren’t just budding musicians; they’re gaining incredible experience that will serve them in whatever future path they choose, artistic or not. More than just young singers, these are young human beings who are just exploring their endless potential.

In Malta, I had the pleasure of meeting Croatia’s Josie Zec. Her song, ‘Game Over‘, might not have climbed up the scoreboard, but Josie’s entry was the only one that night that was completely self-composed. Off stage, she was the very model of confidence and pride; she handled herself with grace and good humour, and was never intimidated by the craziness of the Junior Eurovision experience. At one point, she gathered a handful of the press and recorded a round of “Bean Boozled”, which is sort of like the Russian Roulette of confectionary. While it was technically published under the auspices of Eurovision Ireland, there was no doubt that Josie was running the show. She had more confidence than people three times her age as she led the group of us in an activity that had us both gagging with disgust and doubled over with laughter.

I can easily see her coming to the big show, not necessarily as an artist, but as a member of the delegation. With her unabashed moxie, head for social media and technology (she created her first app at age 12), and knowledge of both music and the Eurovision process, she’d be an asset to any nation’s team.

Got a nice ring to it, doesn’t it?

I agree with Sharleen, together all the team ticked off the most obvious names from the short history of Junior Eurovision. I don’t think anybody can deny that there is some talent there.

However Samantha, you nailed this on the head, that’s the ultimate answer to this question in so many ways. That answer was the perfect reminder that Junior Eurovision is not merely the factory for creating child superstars so many believe it to be, there are so many ways it can inspire. Another similar example would be Joakim Harestad Haukaas, a Norwegian boy competing in the first ever Junior Eurovision who now is a songwriter and producer with Robin Stjernberg’s ‘You‘ and Britney Spears’ ‘Tik Tik Boom‘ among his contributions.

Junior Eurovision is one of the hugest educational opportunites available anywhere. The variety of skills picked up over that week, like seeing the inner logistics of a huge TV production, commanding an English-speaking environment and handling press conferences, they are invaluable for so many fields of work. We may inspire some children to want to be artists representing their nation in some future month of May, but that doesn’t have to be the only goal to Junior Eurovision being successful. The huge range of skills the Junior Eurovision Song Contest gives its young performers, attendees, and followers, will help in whatever journey they make in the future.

One response to “ESC Insight Asks: Who From Junior Should Be Promoted To First Team Action?”