During the live Final of Melodifestivalen on Saturday 14th March the revolutionary new App voting system broke down.

The Melodifestivalen App, which allows Swedish smartphone users to cast five free votes during song performances, has been used throughout this season’s edition alongside telephone and SMS votes.

During the performance of the song that eventually finished 2nd, ‘Jag är fri (Manne Leam Frijje),’ were people on social media claiming that they had trouble voting for the song. The heart symbol which indicates voting can be made using the App and lies on the bottom left hand corner of the screen was taken away during the performance of Jessica Andersson afterwards and remained off for the remainder of the show. 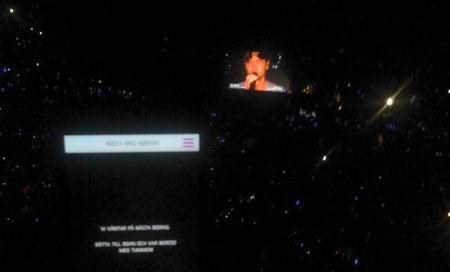 The App was not accepting any more votes during the performance of ‘Heroes‘ (Photo: Alison Wren)

Only after song number 6, that of eventual winner ‘Heroes,’ was information relayed to the audience via our host Sanna Nielsen to inform that App voting has not worked as it should and therefore will not be included in the results.

In the post-show press conference we asked the overall manager for Melodifestivalen, Christel Tholse Willers, to explain exactly what happened.

We saw an extreme amount of pressure on the server at 20:30 and right now we are doing analysis to see if it was an attack.

Christel confirmed that extra capacity was placed onto the system to cope with the expected increase in demand, but that has not been able to hold off any surge made during the television broadcast. The other systems of telephone votes and SMS votes were unaffected.

There was plenty of time to inform the people watching about the App voting and for viewers to choose alternative ways to vote, which we are satisfied with. 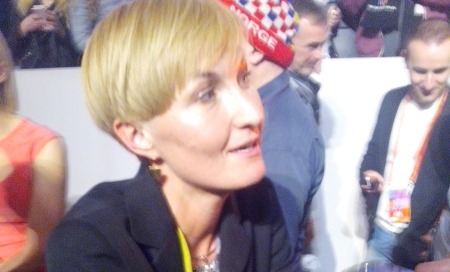 Christel also confirmed that she was ‘very grateful’ that the result was not a close one given the controversy. Måns Zelmerlöw won the competition with a record score of 288 points with a 149 point lead over second place.

We will be completing a longer review of App voting and the improvements to be made for the future in a piece later this week.