Latvia’s Internet Sensation: Getting Inside The Beaver From Riga Written by Ben Robertson on February 24, 2015 | 3 Comments

Sometimes when you visit a National Final the biggest stories are not always whoever wins and goes on to the Eurovision Song Contest. What truly captured the Eurovision Community’s imagination on Sunday night was part of the spectacle at Supernova from Latvia. In particular the ad breaks where online viewers of the live stream (and the studio audience) where treated to the warm-up animal du jour,  the Riga Beaver.

Becoming an internet sensation through these short moments of glory, we had to track him down. ESC Insight sent Ben Robertson after the show to investigate the full story of the larger-than-life character.

On The Hunt For The Perfect Beaver

The ESC Insight team got to meet the Riga Beaver after the Supernova Final on Saturday (one of the perks of attending the National Finals and sitting in the audience), and we promised to follow up an interview for the next day. I wanted to arrange an interview not just to learn more about the character of the Riga Beaver, but also to learn about the story of the man deep inside the Beaver.

However I learned quite quickly that wouldn’t be possible. Dace Grante introduced herself as the management for the Beaver and put me to rights.

Nevertheless I got an interview time confirmed for that afternoon and went from there. We agreed to meet up in a building just to the north east of Riga’s Old Town in the offices of Ideju institūts. It turns out using the Beaver as a symbol to represent Riga was the brainchild of this flash events management company (which was also behind the co-ordination of many events linked to Riga’s status as European Capital of Culture last year).

On arrival I was greeted by Grante who sat me down in its conference room. She is one of the project managers at Ideju institūts but explained how the company are not mistreating animals for their own personal profit.

We don’t want to make our company bigger through the Beaver so we don’t connect the two, this is just for fun.

Grante brings out her laptop to show me some highlights of the Riga Beaver. He is is far more than a Beaver that covers the ad breaks in Supernova. Beavers traditionally have been a menace in Riga’s main waterways by boring through neighbouring trees to create their dams. The Riga Beaver was born in 2013, just as a competition to find an animal to stand as the symbol for Riga started. His young age did not stop the Beaver being chosen above the Black Cat and Rooster by the people of the city.

Since then the Riga Beaver has been involved in events around the town, such as dancing at Riga’s Winter Festival and visiting hospitals as part of the Dr. Clown project. Then came Supernova of course and the opportunity to get noticed in one of Latvian TV’s biggest shows.

…and then there is a Beaver in front of me.

The Riga Beaver straddles into the office looking as fresh and as inviting as he did during Supernova, and squeezes himself around one of the office chairs with an air of confidence from his new-found fame. I ask the Beaver about what he gets up to in his day-to-day life.

I live in the centre of Riga in the Riga channel, a really beautiful place, green all around, meet lots of people, not just locals but people from abroad as well.

I search for new horizons to develop myself, intellectually and experience new things, new points of view, see how the world looks from the other edge. Basically I like to talk to people, I am a simple beaver and like to talk to new people from my point of view, which is a normal beaver point of view.

While I could quite happily watch the beaver all day, with tales of what gets him up in the morning and how we strolls through town looking for happiness, I had a boat to catch in less than an hour, so our focus had to be on the international exposure of the Beaver

What might not be known by many was that the Beaver auditioned himself as one of prospective entrants to represent Latvia in the 2015 Eurovision Song Contest. He even had a song written name-checking previous entries from year’s gone by and performed in front of the Supernova jury.

Everyone else was taking this seriously, we wanted to make (Supernova) fun. The idea was that I would participate in Supernova… and then came this offer from the Supernova production team. In fact in the beginning I understood it would be a little different, like in The X-Factor where I would be one of the two hosts, instead of just entertaining in the middle.

Sometimes it was really hard and I had to come up with lots of things. Since the show was called Supernova they might have thought it was about astronomy and I decided to say lots of facts about the universe to the crowd.

These little slots were much less than the Riga Beaver first thought he would play in the show, but he did not have any clue the impact he would have beyond Latvia’s borders. Unbeknownst to him at the start of the competition, in the far corner of LTV’s Studio 6, was a single camera set up to film from the action on the show’s livestream. Eurovision superfans tuning in across the world then witnessed these bizarre lectures from the Riga Beaver to an equally startled audience.

I asked my good friend when he learnt about the show before the he walked onto the stage for the first time. 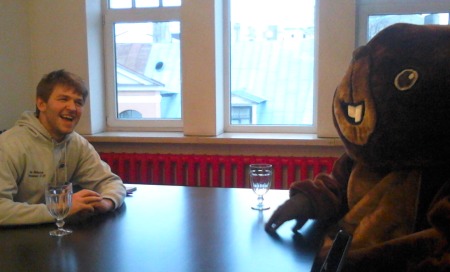 First of all in the beginning I thought if I was warming up the crowd I thought it would be a little bit on TV, but when it was ad breaks I had no idea anybody was watching. In the second show I was told it was on live stream but I didn’t know it was so much attention to this.

All the live streams I have done before have not had such a big impact.

On the third time I found out there was no sound so I decided to do more movement based performances such as the dance with the sword and when I saw this on the internet afterwards I was so astonished and I was like ‘wow, I was so good!’

In the final show their was a special treat prepared for the international audience… the Riga Beaver was going to get his sound turned on and he was going to perform as well. His moment of fame was one that made the Beaver tremble with nerves.

When I was in the rehearsal they said you had a minute to sing and that was all. I was really nervous about the last song. When I tried the first time it was horrible. Then we tried for a second time and it was better and I asked the producer how I can make it all better.

‘Well, for the commercial ad breaks, you are the director’ he told me, ‘you know better what to do.’ When my hands were not tied I could do whatever I wanted. I really enjoyed this and it was great fun, interesting and challenging at the same time to think of new things all the time.

It was great fun for the Eurovision community as well. #RigaBeaver became a twitter trend far beyond Latvia’s borders and has fired their imagination beyond even just Sunday night. The Beaver’s throwaway comment during the broadcast about being a symbol for European culture has turned into a campaign and petition by Eurovision fans to increase the profile of the Beaver. Further calls have been made for the Riga Beaver to read out Latvia’s Eurovision points in May. Riga Beaver unsurprisingly would love to be asked.

Our Beaver even suggested that another entry to Supernova could be on the cards, but this time he is looking to compete with a hip-hop or rap number.

For us in the Eurovision circle the circus is unlikely to die in the near future. It’s hard to explain just why the Beaver is so popular, but it wouldn’t be the first time that a bit of exposure has led someone to the role of spokesperson, perhaps Lynda Woodruff could give the Beaver a helping hand in the quest for international exposure.

On his own, the Beaver has turned what would be otherwise dull-beyond-Toto advert breaks into the entertaining highlight of the Latvian selection process. This story of the Beaver is not going to run out of steam any time soon, and I hope that we see more Beaver action in Latvia’s Eurovision process in the future.

Riga Beaver was very humble about the good fortune that has made him an internet sensation so far, but is ready, willing and able to continue his surge to fame and glory. 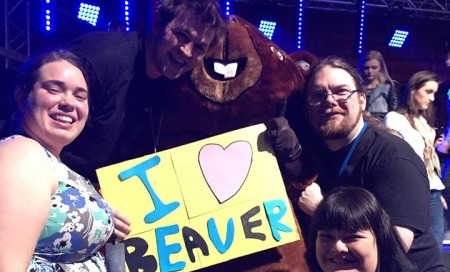 Alison, Ben, Ewan and Sharleen meeting the Riga Beaver after the final of Supernova

If any character has a smile that charming then I am sure we will see more of Riga Beaver in the future.

3 responses to “Latvia’s Internet Sensation: Getting Inside The Beaver From Riga”