The Danish Dilemma: The Perennial Issue Of Songwriting In Junior Eurovision Written by Ben Robertson on November 13, 2014 | 1 Comment

ESC Insight’s Ben Robertson investigates the evolution of songwriting at Junior Eurovision and how much input the young musicians have in the songs they present.

The Eurovision Song Contest has always been a place for new songs, new music. Ever since its inception in 1956, the Song Contest has been a competition where the songwriting is rewarded. Indeed, as veteran , it is really only in the modern era that the artist has been a bigger focus, whereas when he started only the writers received the prize.

Junior Eurovision started from the same noble beginnings. In the original conception of the competition, songwriting was at the heart of the ethos. The rules of the first Junior Eurovision in 2003 were strict about the help that can be given to the young people.

“Each participating organization shall obtain a signed statement from the parent(s)/guardian(s) of the child artist(s), stating that the song entered is original and has never been commercially released and has been written and composed by the child artist(s) without any professional help.”

Furthermore, should the songwriter not be the lead artist, a second rule ensures they have to be a part of the glory as well.

This created some bizarre coming togethers in the first show, Belarus’ first Eurovision experience was in Copenhagen featured the 15-year-old composer on the keyboard in complete contrast to the little energetic 10-year-old performer. More sinister were the allegations that confounded the contest, rumours flew about which songs had professional help, which host country Denmark was proved to have had.

That Copenhagen was the host country for that first Junior Eurovision was no coincidence. Denmark was instrumental in the creation of MGP Nordic which was the forerunner to the Junior Eurovision we know today. This started in 2000 with a spin-off competition after the Danish final and is today known as MGP Junior. With successful programs and local hits the format spread to the other Scandinavian nations and they came together for the first united contest in 2002.

Of course it only lasted the one year as then Junior Eurovision was born the year after. Or so was the idea.

MGP Nordic died in 2009 after Ulrik’s victory and only on its death did SVT commit to Junior Eurovision again (commercial channel TV4 was involved in Junior Eurovision). However, Denmark’s national final still continued without Junior Eurovision. It has a format to be admired that takes place over the whole year. Prospective artists need to have written a song and lyrics themselves. They then have the opportunity to come along to workshop days all around the country. Here they get the tips and support to boost up the songs they have already prepared, before they get whittled down to a top ten and performing on the huge big national final stage and to a TV audience.

It is a wonderful, nurturing and educational experience for the young songwriters and gives what DR believe is the right and fair amount of the word ‘help’. It isn’t writing the song for them, it isn’t a songwriter coming in and forcing their ideas, this is the process where all the kids benefit from is the technical skills needed to create songs that look and sound professional. They learn and apply the knowledge themselves. 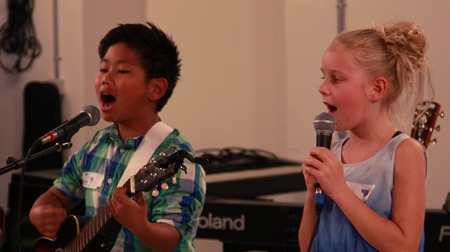 Danish children in their audition round (Source: DR B&U)

I believe every country would (and if not, should) love a model such as what Denmark has created, and it is a model that is similar in Norway (where Oslo Spectrum is full each year) and Finland (even on the small Swedish language YLE Fem). To expect this from all our competing nations is just not feasible in practice nor for the EBU to police. Sadly getting access to reliable information confirming that the children started from scratch when writing each song and were able to build from there is going to be unattainable.

There is an genuine integrity to what Denmark is doing that they feel needs to be replicated in Junior Eurovision to be a part of it in it’s current form. Junior Eurovision has been transforming since 2006 but may be moving further away from Denmark’s idealistic aim.

The songwriting claims have dogged Junior Eurovision since its inception. The move in 2008 was to formally allow songs to be co-written by adults and to have help, previously everybody involved in the writing had to be within the age limit. Something simply had to be done to stop the controversy that rained each year. Changes the year before, to increase the age limit from 8 to 10 and to allow young artists who were already commercially signed also give the impression of a contest looking to improve its reputation, and arguably improve the quality of act displayed.

The result of this was a complete switch to a contest where the adults were more influencial in the show. The 2008 winner Bzzz was a construct of musical ideas that were brought together and assembled by the adult producer with some ideas from the kids involved but not anything approaching a full song. Our contest this Saturday in 2014 is treating us to former Eurovision winning songwriters (Thomas G:Son), former Eurovision entrants (Alex Panayi) and top level producers (Maxim Fadeev, most known by Eurovision fans for his work with Serebro) helping to make an exciting contest.

This in many cases is in DR’s view going beyond that of help. Panayi for example is fully responsible for the music in the Cypriot entry with artist Sophia only part of the team of three helping with lyrics. I asked Sophia and Alex about the songwriting process during their Press Conference. The answer in response was one emphasising how vital Sophia was to this process, and that the songwriters all put their ideas together and then cut and tweaked their options to find the final idea. Sophia was a part of the songwriting process undoubtedly, but whether we say she was helped to make the final steps on the product or she was adding just a final input to the package is up for debate. To remove the songwriting caveat may limit controversy in the contest build-up, and may subjectively improve the song quality, but the ethos is too far from the Danish model for DR to agree to take part.

The Good Guys Can Win Too

However, not every country is shrouded in secrecy over the apparent issues of where these songs come from. There is plenty of evidence that good songwriting comes from the minds of our young people. Both The Netherlands and Sweden produce a behind-the-scenes documentary showing the process that each of their entrants took to get to their respective national finals. The songwriting process is clear as are the steps that the adult supervision helps with.

In the Dutch auditions this year Julia performed her song Around. However the performance that took her through to the final eight was very different to what we may recognise now. Julia sits at the piano with a song in an almost jazzy feel. The around-and-around hook is present, but the tempo and rhythm of this is significantly different, and the verses are near-impossible to correlate with the performance we will see on stage in Malta. Julia may have started the process, but lots of input from other producers has seen the song mould into an almost new being. This isn’t true of all Dutch Junior entries, second placed Waarom and last year’s winner Double Me were lacking in production at this audition stage but are clearly the same song just spiced up.   That can’t be said about this year’s substantial Dutch overhaul.

In Sweden the new rules for Lilla Melodifestivalen 2014 saw a large spike in applications to almost 1000. This is mainly due to the removal of the rule that you must enter with a song you have written,with that only required if you reach the final eight. To help make that song awesome, professional songwriters spent a day in the studio to perfect their songs. SVT produced a 40-minute documentary showing this process which gives some indication of the kind of help the artists received. In Julia Kedhammar’s case we clearly see Thomas G:Son assisting with the distinctive modern schlager production, and to rearrange the lyrics to fit better and to cut some words out from the final text. One can argue that this is helping and sharing the skills that work for a great pop song rather than imposing them.

Boy band Skyscraper has Jimmy Jansson as mentor for the competition. Contrary to G:Son’s participation we don’t see evidence of the four young boys coming up with ideas to the music to their bouncy pop song. We see a short clip where Jimmy plays his recommended chorus on the guitar which the boys love, and then later them also loving the production that Jimmy has done. Perhaps we did not see the full story on the TV show, however in contrast to Julia Kedhammar’s song this perhaps uses a more liberal use of the word help.

Again, even this step here is not necessarily needed. Last year Elias Elffors Elfström won Lilla Melodifestivalen. He was the only one of the eight acts who not only wrote but produced his entry entirely by himself. It is possible for children to write great music and arguably Elias’ version of Det Är Dit Vi Ska lost impact in Kiev with the clinical production from Quiz and Larossi for the Junior Eurovision Final.

Both Sweden and The Netherlands show a commitment to letting songs flourish and grow with the children. It may not be a perfect ride in all cases, and I would question how much of this input is led by the kids themselves to decide upon, but they do make it possible for something that is a child’s work to reach an international audience. That Sweden and The Netherlands have more than reasonable records in Junior Eurovision is proof that the contest need not be dominated by children who are mere puppets on the strings of controlling adults.

We All Can Be Successful

We have songs at Junior Eurovision this year with a variable amount of input from children. Some began as children’s songs which then received polishing touches, and others appear as songs that the children have instead adapted to make their own. They have all been involved in the songwriting process at some level. 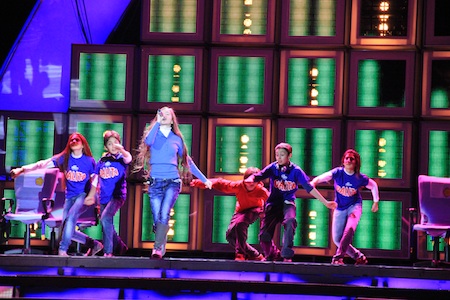 With the best will in the world this is not practical to demand of every country in Europe and to insist every broadcaster provides reliable evidence of this happening, the temptation like in previous Junior Eurovision contests to not play fair is just too high. NRK in Norway, DR in Denmark, YLE in Finland should be immensely proud of their efforts to improving the songwriting abilities of young people and engaging them in the Eurovision process at an early age. As these young songwriters grow their experiences will be an advantage, meaning that the chances of better results in Eurovision may well increase, as well as the other skills and benefits to having a creative population.

Junior Eurovision needs to keep even the most tokenistic of requirements for our acts to have input into the songs. We need to show that it is not ok for adults to dictate what can be for many of these young people already the biggest performance they will ever do in their life. If broadcasters do more than this basic level, what a great bonus this is, and they will be the ones providing a more holistic educational experience for the next generation. Junior Eurovision is after all about the future and not the present.