The Grand Final Running Order: Denmark's Take On How To Run Eurovision Written by Ben Robertson on May 10, 2014 | 9 Comments

Late on Thursday evening, we knew all 26 songs to take part in the Grand Final of the Eurovision Song Contest 2014. The show team from DR then went backstage and with EBU’s approval released a running order for the Grand Final. Those who have signed up for the ESC Insight Newsletter, will have seen my immediate reactions on the running order of Eurovision 2014. Expanding on these reflections, Ben Robertson was live in the Press Centre for the Jury Final.  Here are the reactions to how the show is built up, and to see if the final running order helps the flow of the show.

What Do We Expect From DR

This is the second year in a row that the EBU have given permission for the host broadcaster to select the songs in the running order. On ESC Insight we have written previously about the differences between creating a running order for a strong competition, and for a good TV show.

We can also infer something from the focus of last year in Malmö when SVT hosted in Malmö. The winners of the two semi finals, Denmark and Azerbaijan, were both drawn to perform in the second half of the show. Placed by SVT 18th and 20th, they were separated by Iceland in the Grand Final running order, a distant 6th in the Semi Final and therefore able to be used as cannon fodder in the show. Similarly the infamous draw of death, number 2, was given to Lithuania, with a critically unacclaimed entry in Eurovision 2013, and also from a country with a relatively low viewing rate across Europe. 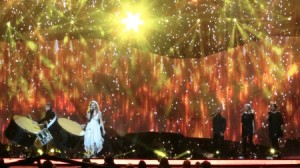 Emmelie slotted in nicely after Hungary and before Iceland last year

Across the bridge to Denmark, it appears there are similar patterns from the draw that would be expected at this stage to infer some of the same processes. Belarus was a borderline qualifier in the odds, and gets shoved into number two. Our big movers in the betting over the last week have been The Netherlands and Austria, with the United Kingdom being a positive mover in rehearsals and Sweden holding position as favourite. Austria and Sweden close off the top half of the running order in 11th and 13th, split apart by Elaiza our shock amateur winners from the German selection process who are a betting contender for last place. The Netherlands and United Kingdom end the show in 24th and 26th, split apart by the plucky Republic of San Marino with their shock qualification.

It appears that as well as splitting apart different genres of songs and different musical tastes, the production team are aware of which songs are expected to do well in the competition.  While the production team are not privy to the actual results of the semi finals, they will be aware of press centre voting and of betting odds.  They are creating running orders mindful to give popular songs a decent chance in the contest, and to sacrifice songs not expected to score highly around them. 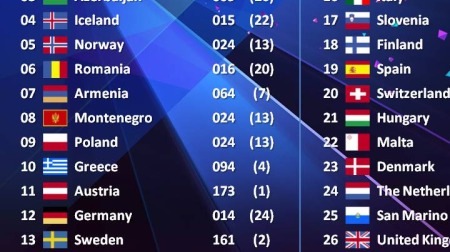 The Scandinavian Model Of Eurovision

Both DR and SVT should know what they are doing and the power of the running order from their productions of Melodi Grand Prix and Melodifestivalen respectively. That favourites have been placed late by DR is hardly a huge surprise. In Melodi Grand Prix we have to go back to 2008 to find a winner of the Danish National Final coming from the first half of the show. Equally we find a movement of uplifting pop songs in the pimp slot ending the show, for example Wanna Be Loved, Unbreakable and torch song Venter closing off the show. All three reached the Super Final in the Danish final as well. The Danish show weights strongly to favourites, we have to go back to 1999 to find a Melodi Grand Prix song drawn to sing last in their final finish lower than 3rd.

This is clearly a statistically significant factor. Danish TV like to give the favourites a big ending slot, and they have appeared to follow the book on this looking at the running orders of either half. 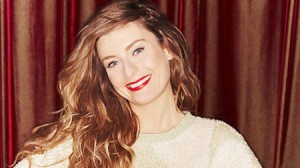 The idea of splitting up favourites is nothing new either. In the last two years, Melodi Grand Prix in Denmark has had the winner come from number eight in the ten-strong draw. Both Emmelie de Forest and Basim were tipped in the run up to the Danish final, and were split from the uptempo show-stopper with a more downbeat and less successful entry. This idea is one that would not be unnoticed by the Dutch delegation who have drawn that third from last slot.

Our Danish team are purely following the running order trends that have worked out successful for them to find songs, and they have applied the same logic here to the big contest.

Sweden followed patterns of Melodifestivalen entries too last year. Bizarre Melodifestivalen songs of recent years, such as ‘Mirakel’ and ‘Around the World’ were given last place slots in semi finals, and the same principle led to Serbia and Romania having the last semi final slot in the Malmö competition.

Both SVT and DR do what they are comfortable with in producing a running order draw.

One stumbling block in this is how Denmark have created a running order that works really hard to give boosts to those favourites is that the apparent boosting has a political fallout as well. It is a highly Westernised back end of either half. Only one non-EU country is in the final five of either the first half or the second half, and that is the tiny San Marino.

In contrast Russia in the second half, a country evidently not in political favour in the contest giving the reaction to their qualifaction on Tuesday’s Semi Final, has been given the slot of 15, or, one could argue, is running second in the second half of the Semi Final. Our first three songs come from Ukraine, Belarus and Azerbaijan, far away from the traditional view of Europe that the regular Danish TV viewer has.

This might be a completely unintended result of the running order putting together in Denmark’s show, however that the trend is so easy to spot when going through the show from first to last needs to be a consideration in building the show. When playing with a Eurovision running order, we have to make sure to do it with the geographical and political map of our continent somewhere in the background of the process. These songs are not toys in a national final we can play with and build up our own stories, they come pre-packaged with histories built from their own countries and each of those 26 nations needs to feel they go in with a fair crack at the competitive aspects of the show.

Impressions From The Jury Final

Seeing the show in action from the Jury Final, it was hard to really see what stood out from the running order. I don’t disagree with what the from directly after the draw was made. However what is fascinating is the flow above towards the end of each half does come across in the production.  You feel a cresendo in pace and energy up through as the show peaks towards where Austria lies at 11th place. There is then a back down to Earth sensation that ramps up in volume heading through the second half which culminates in Denmark placed at 23rd, before we get the entries of The Netherlands and The United Kingdom, the latter in particular gives the big finish ending, amplified by the use of the pyrotechnics on the final chorus.

You also note the craziness and bizarreness of the linear sequence that the final order is. Cheeky Belarus goes into jazzy Azerbaijan before technicolour Iceland hits in with intimate Norway coming in before cheesy Romania. It’s your classic slow-fast-slow-fast build up to each song.  Rather than letting each song stand out, it just creates a car crash of intrigue into what is next, but makes it difficult to judge what is good or not. The gut feeling is that it amplifies any effect the running order has, rather than diminishes it, as it takes a fair chunk of the show to get into the swing of the competitive aspect of actually rating the songs.

This year we will get the full data on voting from each individual jury member, and it will be fascinating to see if there is any patterns based on the running order from our 184 musical experts and 1 trophy designer on the juries.

Sticking With What You Feel Comfortable With

What DR have produced, is just very Danish. What Sweden did was very Swedish. They have a feel for how to do this to make their own show, which brings in ratings all the time. It is interesting to note that this isn’t a view shared across the continent.  Many national finals are conducted by a random draw, and we note that in Junior Eurovision 2013 the Ukrainian broadcaster made the decision to move to a 100% random draw instead.  Quoted before Junior Eurovision last year, Executive Producer Roman Keryk came out saying part of this process was to ensure a ‘fair and transparent’ process for all the participants.

Some broadcasters will shy away from the power, the responsibility and the potential political pressure of having to produce a running order. The Scandinavians see this model as a part of the show, but that might not be the case for the rest of Europe. What may make a good running order in Scandinavian eyes is likely to be different across Europe.

With a Scandinavian victory by no means a certainty in the show tonight, it would be no surprise to see a different feel to the running order, or even a return to a random selection, if we move out of the Nordic countries for 2015.

9 responses to “The Grand Final Running Order: Denmark's Take On How To Run Eurovision”