The Eurovision Song Contest of 2013 will be one marked with many changes – from the performance position being determined by producers, right down to how the staging will feature standing-room-only dancefloor to give the show a more lively atmosphere.  After todays’ unveiling of the rules, the fan spotlight is now on some subtle, yet significant, changes to the way the televote and jury vote will be combined in Malmo.  Naturally, there’s a fair bit of confusion. What has changed? What are the implications? Will it change who wins? How does it work, exactly?  Our special guest writer, and statistical genius, John Egan examines the new voting rules and attempts to answer some of these questions.

Until Malmo, the televote and jury vote components in each voting country were combined by allocation 12, 10, and then from 8 down to 1 point for the top 10 vote recipients in each component, resulting in a maximum of 24 points (12 points from both the televote and jury). That meant that as many 7 entries from a semi-final with 17 total entries (if the jury and televoters came up with the same top 10) would receive no points from that country. These aggregate scores were added up and the 10 entries that scored the most points from that total were then given the voting scores that we see delivered as the final result – from 1, right up to the douze points. If two songs resulted in the same aggregate score, the one with a higher televote ranking was put ahead.

Arguably this simple system worked reasonably well, so long as the alignment between the jury and televote components was fairly consistent. If both top 10 lists have the same (or reasonably similar) entries, the “televote trumps the jury” makes it simple to implement and nicely populist.  Unfortunately, there’s sometimes a sharp difference between which 10 songs the juries liked versus the viewing public. The changes now being introduced in Malmo are directly addressing this issue, however are nothing new to Eurovision; it is simply revamped. 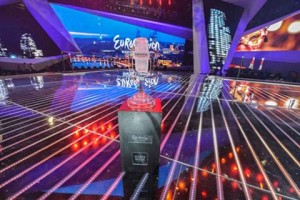 In times past, jury members ranked or scored all the entries before each country’s collective top 10 was calculated and awarded. Of course, this was before the introduction of televoting, but can be applied just as easily in the modern contest.  So to put it simply, for 2013, all countries will now be required to provide rankings of all countries in each of the semis as well as final, in both the jury and televote rather than just their top 10 countries of each show.  These results will then be combined to give an overall total for each, a final ranking given, and then the traditional points applied to the top 10 of that newly created list.

The changes: our analysis

We could drill deeply into the maths at play here, but for those who lose focus when numbers go beyond a simple ‘douze points’ (that would be me – ed) , it would probably be more confusing that clarifying. Instead we’ll look at the results of the 2012 semi-finals and final in detail, and the 2011 final for a quick comparison.  From this you can see the extent to which this change might have made a difference in who qualified from the semi-finals and where everyone ended up in the final rankings for Saturday night’s big show.  Remember it’s the rankings in each of the televote and jury vote components that matters – not the raw score in either.

Despite the panic that we are currently seeing amongst the fans and discussions on the chat boards, we can see that 19 out of the qualifiers from last year’s semi-finals would have still made the cut under this new change.

To demonstrate, here is the summary data: 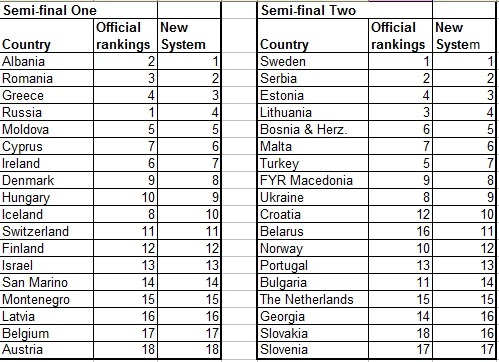 As evidenced, the new change can see positions shift somewhat.  In the first semi-final, Russia moves from 1st to 4th: Albania ends up the winner, Romania and Greece each move up a placing , and there’s a bit of movement between spots 6-10.  However, and most critically, the qualifications remain unchanged.

In the second semi-final, we see Estonia and Lithuania swapping their 3rd and 4th positions, and Turkey dropping behind the likes Bosnia, Malta, FYR Macedonia and Ukraine.  Only the 10th place result would have seen a difference to our qualifiers list for the Saturday finale, with the changes providing Croatias’ Nina Badric with a little piece of ‘Nebo’ (Heaven), and unfortunately for Norway, Tooji no longer ‘Stay’ing in contention.

So do the results change for the Grand Final 2012?

Let us take a look at the adjusted scoreboard – 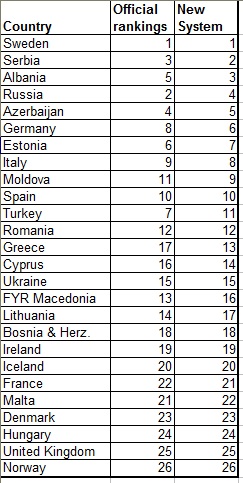 As we can see, Loreen remains our victor for 2012, and despite the dreams of many countries and fans to be elsewhere as our wallets drain, we would still be going to Malmo in 2013.  Admittedly though, after the second most convincing win in the history of the Contest, it’s unsurprising that Loreen still wins under the adjusted rankings.  However under the new rules, Serbias’ Zeljko Joksimovic would have equalled his 2004 Istanbul result and finished runner-up rather than Russia; a result of the juries not being as enamored by the entry as much as the public. Albania would have moved up to the bronze medal position and Russias’ Grannies would have danced their way back to 4th. Azerbaijan also would have found themselves a position lower, whilst Germany – not standing still – moves up two.

Perhaps the most noteworthy other shifts are Turkey falling from 7th to 11th and Moldova climbing into the top 10 by grabbing 9th place. The rest of the top 10 moves round a bit.

In a year like 2012, the winner wouldn’t have been anyone besides Sweden. For 2011, where the differences between televotes and juries were sometimes very stark, and the win was much narrower..

We can see that the new aggregate still gives us the same winner before and after the rule change.  Azerbaijans’ Ell and Nikki with their entry ‘Running Scared’ remain the victors at the 2011 contest, though Eric Saade is a bit more ‘Popular’ than before. Ireland moves into the top 5 (from 8th), Serbia moves up five places into the top 10 (14th to 9th) and Georgia is bumped down to 11th. Otherwise, there’s only a bit of shifting around.

Ultimately, what would give a clearer indication of the implications of this change would be to take the complete rankings from a country’s jury and televotes from 2011 or 2012; unfortunately this data does not exist. Jurors last year and the year before only provided their top 10 list within each jury, which then created the overall top 10 for the entire jury.

This change is very much evolutionary rather than revolutionary it seems. Nonetheless, we will find out first hand how this change, as well as the standing room only and the performance order changes will all fare in just over two months time.

16 responses to “The New Ranked Scoring System: Looking Forward By Looking Back”