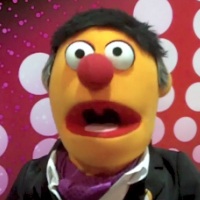 How much do you know about the United Kingdom’s adventures at the Eurovision Song Contest? Terry’s tried to forget a lot of it, but author and historian Gordon Roxburgh is doing the exact opposite for his new series of books.

“Songs for Europe: The United Kingdom at the Eurovision Song Contest” is now available, and it covers the fifties and sixties, with later years covered by the upcoming volumes. Terry caught up with Gordon to find out a little bit more about the series.

It does look a bit like ‘The Black Theatre of Prauge’, but Terry never could afford a decent lighting technician. Why do you think his commentary was always audio only?

You can follow Terry’s adventures through the 2013 season of the Eurovision Song Contest here on ESC Insight, or over on TerryEurovision.com.

About The Author: Terry Eurovision

The name is Vision. Terry Vision. The former radio DJ, chat show host, and noted charity telethon compere, was once the presenter you called on when you needed an unflappable light entertainment host with a twinkle in their eye. Brought out of retirement, Terry Vision is now ESC Insight's Senior Interviewer.