Raising the Bar Ever Higher as Eurovision Heads to Baku Written by Paul Jordan on May 14, 2012 | 2 Comments

The Eurovision Song Contest is an event which was designed to unite post-war Europe, even though first and foremost it is a television show, and every year offers national broadcasters the opportunity to pioneer new broadcasting techniques. The  Contest is a mammoth event and the 2012 edition is bigger than ever.

The 2012 Eurovision Song Contest will be staged in Baku, Azerbaijan. The Azeri government is said to have provided over €48 million to stage the event, dwarfing the €30 million budget in Moscow in 2009. This, along with the construction of a brand new venue specifically for Eurovision, The Baku Crystal Hall, in little over eight months means that the 2012 Contest is set to be the most spectacular yet.

However, this is not the first time that the bar has been raised when it comes to the Eurovision Song Contest. Arguably one of the more significant developments in the Contest’s history was the introduction of colour television by the BBC in 1968, the use of wireless microphones in 1983 and of course the advent of televoting in 1997 which revolutionised the Contest. Let’s look back to some of the more significant Contests from the past few decades. 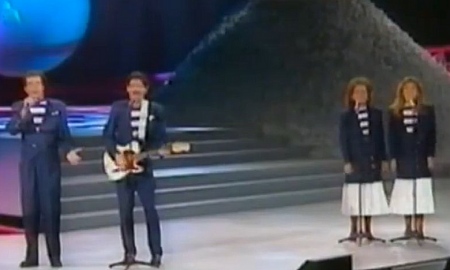 It is fair to say that by the mid-1980s the Eurovision Song Contest was plodding along, continuing to be produced according to a similar format with little in terms of imaginative staging or new broadcasting techniques emerging. That was until Eurovision came to Brussels in 1987.

22 countries entered which, was at that time, the largest number of participating countries to do so. 1987 was a breakthrough in terms of staging. It was a much more modern event than its predecessors. The stage, whilst comparatively small, was ambitious and featured effective laser lighting. A brave attempt at dabbling with laser beams was made by the French in 1978 but ultimately it was in 1987 that heralded a new era in the way Eurovision sets were designed or as John Kennedy O’Connor, author of The Eurovision Song Contest – The Official History, states “Eurovision 1987 gave the impression that the contest was trying to catch up with the modern world” (O’Connor 2007, p.108).

Ireland and RTE developed Eurovision further in 1988 giving it a younger, fresher image. According to Liam Miller, the director of Eurovision 1988, the creative team aimed to give Eurovision a “younger” image and present Ireland as a modern nation in Europe (RTE And Finally France [TV] 1988).

The latest technology and design were used to create what was seen at the time as a groundbreaking production. The stage was the largest ever used in Eurovision at the time and clever use of lighting gave the set added depths. The use of “video walls” on either side of the stage meant that Eurovision was more in-sync with other contemporary shows at the time (Top of the Pops for example). The mechanical scoreboard and was replaced by a computerised version.

The interval that year featured the Irish rock group The Hothouse Flowers, the video for their song “Don’t Go” was filmed in 11 different countries and was at that time, the most expensive video made in Ireland. 1988 set a standard which several countries drew inspiration from since the video wall made an appearance every year since then until 1992! Ultimately 1988 is synonymous with Celine Dion’s famous victory over the UK, however one of the most enduring legacies of that year is surely the attempt to bring the Contest in line with the modern age.

1993 is a noteworthy year for several reasons. It was the year that Ireland won the contest at home for the first time, it was the final year of the juries announcing their votes by telephone, and it also saw the debuts of Croatia, Slovenia and Bosnia Herzegovina. 1993 is perhaps more famously remembered for the venue, Millstreet. Instead of the expected choice, Dublin, RTE took the Eurovision Song Contest to a small village in County Cork, with a population of just 1500 people. Millstreet boasted one of the largest equestrian auditoriums in the country, the Green Glens Arena. Bringing such a huge show to a small town was no easy task, but it was one which RTE managed to pull off. The local infrastructure was given a complete overhaul prior to the contest and as such it is evidence of the event bringing long-term investments.

A clear sign of the importance that Ireland attached to the event was the appearance of Irish Premier, Albert Reynolds who visited the arena during renovations. “You could not buy the space on television screens all around the world that you get from the Eurovision Song Contest […] I have no doubt that down in Millstreet when you combine the talents of RTE and the people here in Millstreet, we will have an excellent production on the night”. 1993 was a triumph for RTE who managed to stage a modern contest despite the obvious challenges of hosting the event in a rural setting. Ireland and RTE managed to silence those who doubted that it would be possible to host the contest in Millstreet. Certainly Niamh Kavanagh’s victory would have been the icing on the cake of a very ambitious project.

In 1994 after Ireland won again, the contest returned to Dublin and it was again perceived to be an overall success. At this stage the Eurovision Song Contest was becoming more expensive to host since the number of entrants dramatically increased in the 1990s. There was also pressure to use the latest, often expensive, technology available. As a result, some critics began to question the usefulness of hosting the ESC. However according to Liam Miller, Head of Programmes at RTE, failure to produce the show would not only be damaging for Ireland’s image but would also impact upon national pride. Miller stated that RTE took the event seriously as an opportunity to promote Ireland. “We [RTE] always approached this [ESC] on the basis that you not get involved unless you are prepared for the consequences of winning. This is a matter of national pride” (BBC Counting The Cost [TV] 1995).

1994 was the notable for being the first year where “in-vision” voting was used. Whilst by 1994 this was not exactly groundbreaking, it did represent another attempt by RTE at modernising the contest. However it is the interval act of 1994 which makes the contest that year truly stand out. Riverdance, created specifically for the Eurovision Song Contest, combined traditional Irish folk music and dance with modern adaptations. Riverdance became a global phenomenon, touring the world and breaking box office records everywhere it went, reshaping modern dance on the way. Riverdance is the biggest money-spinner ever created by Eurovision, with the single exception of ABBA. 18 years after it debuted Riverdance remains the benchmark by which all over interval acts are measured.

1996 is significant in the history of the Eurovision Song Contest in that it gave a glimpse into future developments of the event. A pre-selection was held in order to whittle down the number of competing countries, a pre-cursor to the semi final format of today. In terms of production 1996 was groundbreaking both in terms of the size of set and venue and also the production values. Virtual reality voting was introduced using a “blue screen” and whilst it didn’t catch on, represented a departure from the traditional scoreboard. On-screen graphics during the performances also added to the image of the 1996 contest as one of modernity. The use of “Euro Song” as opposed to Eurovision Song Contest showed that there was an attempt to re-brand Eurovision and ensure that it remained a relevant television production.

1996 also saw each competing participant receive a “good luck” message from a national leader or politician before the respective entry was performed. This was a novelty addition and one which was never repeated. Effectively this can be used as a barometer for how significantly some countries saw the contest. For example, Estonia was cheered on by Tiit Vähi, the then-Prime Minister, and Turkey by President Süleyman Demirel. Spain, on the other hand, was supported by an ambassador and the UK’s entry, Gina G, received a message of support from Virginia Bottomley, the Secretary of State for National Heritage.

2009 was, until this year, the most expensive Eurovision Song Contest ever. It was like no other before; it cost over 30 million Euros and boasted the largest-ever stage – according to the organisers it held 30% of the world’s available LED lighting. The event was also one of the most controversial in recent years, with various political and nationalist grievances being played out in front of an international audience. Given the unprecedented budget in the midst of a global financial crisis and the overall spectacle surrounding the 2009 affair, the significance of Eurovision 2009 is plain to see. Such was the scale of the 2009 contest that Norwegian broadcaster NRK openly said that they were not going to compete with Russia the year before.

The 2012 Eurovision Song Contest will be an event which will be closely watched for numerous reasons. I look forward to experiencing it first-hand next week in Baku. These are interesting times for the EBU, for Eurovision in the future and indeed for us here at ESC Insight.

Which contests stand out for you and why? Let us know!