2011 saw the ninth Junior Eurovision Song Contest, which was held in Yerevan, Armenia. ESC Insight was there, and now Ewan Spence tells his story of that amazing week in…

“It’s Cold and there are Children Singing: Adventures in Armenia and the Junior Eurovision Song Contest 2011.”

Now available on Amazon as an eBook, you’ll have a chance to go behind the scenes at one of the largest singing contests for young people in the world, and hear the story of how ESC Insight was able to bring you the coverage we did.

You’ll read about our exploits with the rest of the Eurovision community in Yerevan, the capital city of Armenia and one of the oldest cities in the world; we’ll take you through the rehearsals, the build up to the live show, and the nail-biting victory in the last round of voting for one of the thirteen countries.

Mixing event reporting with travel writing and the stories of the fans and children who make up the event, “It’s Cold and there are Children Singing” delivers on ESC Insight’s goal to bring you the world of Eurovision with depth, and a human voice, getting you as close as possible to this year’s Junior Eurovision Song Contest. 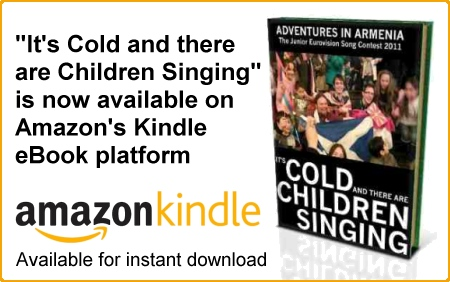 We’re looking at a few more publishing platforms – but with Kindle being one of the largest platforms out there, and with clients on iOS, Android and Windows Phone devices, we think the eBook will be available to as many of you as possible through Amazon.

If you’d like a PDF copy of the book, we’re looking at an online PayPal Store as well, but in the moment get in touch directly with us here at ESC Insight and we’ll sort you out with a copy as soon as we can.

If you’re wondering about the strange price (it’s currently £1.67 for UK readers) the answer is pretty simple. It’s the lowest price we can set that earns us 50p at Amazon, after the VAT is paid and Amazon take their cut.

If you’re ready to ! But we’re not asking you to buy the 13,000 word book blind. Here’s a preview of  “It’s Cold and there are Children Singing: Adventures in Armenia“

There, I’ve said it. I’ll say it again if I have to. In my defence, this isn’t some state of mind that I have slowly come to realise is true. I have known for years, for decades, for almost as long as I can remember, that I have this addiction to every country in Europe each choosing one new song and sending it to a live televised Concert where the people of Europe will vote and decide a winner on the night. I am addicted…

…to the Eurovision Song Contest.

This isn’t some witty lead in to a stand-up routine, I genuinely am one of those people that will hear “tell me something about Eurovision” as a challenge and proceed over the next hour to explain that “no, it isn’t that the rest of Europe hates the United Kingdom and doesn’t vote for our song because they have some political agenda, it’s because we sent a rubbish song, with rubbish support, to be sung by an ex-binman.” To be fair to Andy Abraham, every UK entrant that wears that shade of blue on stage does badly. Evidence for the defence? The reformed boy band we sent to Dusseldorf to sing in Eurovision 2012…Blue

Yes, that sort of addict.

I started gently. In my teenage years, I knew that Eurovision happened every year in the spring. As I got older, it was something that I looked forward to, even though my family’s tastes meant that I had to watch it on my own. Things started to change in 2008 (which I may write about another time, leave me something for the next book!). For the moment, just go with the idea that I love the Contest in the same way as that Manchester United fan who wears the club’s red jersey to watch the football highlights on ‘Match of the Day’.

I find that amazing, given the support Junior Eurovision initially had in the UK. We were one of the inaugural contenders, we finished second and third in the first two years, and would have killed for a result like that with Blue in Düsseldorf. We were going to host the second Contest in Manchester’s MEN Arena, but ITV pulled out for something better, probably with Simon Cowell involved. Junior Eurovision left the airwaves in the UK.

Thankfully this was just as the Internet started to work out how to do streaming video well. As my Eurovision-spidey-sense exploded in 2008, that was where I turned to watch the Contest. The rules are almost identical to that of Adult Eurovision held in May, but with one notable exception. The performers on stage must now be between 10 and 15 years old on the day of the Contest. That’s enough to creep out some people, and to make others think of child performers pushed into the limelight at a young age, such as Little Jimmy Osmond, Charlotte Church or Lena Zavaroni.

I’ll argue that Junior Eurovision is far less exploitative than the tabloid newspapers would have you think (not that they every mention it), and is a far better environment than something like Britian’s Got Talent.

This trip really is a guilty pleasure. It’s going to be a bit of a pilgrimage to finally take in Junior Eurovision. I’ve been to Adult Eurovision every year since my conversion, how will this compare? It is a competition, and competition is brutal. The only concession to the performers being younger is they get twelve points just for turning up – there’s not going to be any bullying after the Contest because someone scores null points – but they will still face the reality of telephone and jury voting. The media will pour over the music videos and analyse the rehearsals looking for pearls and swines, and the show itself is a production with hundreds of thousands of euros spent on it (at the start of December, when Junior Eurovision was running, euros were still worth something).

And you have children as young as ten carrying the flag for their country into this?

It sounds a nightmare described that way. Let me try again from the sunny side of the street. This is a chance for some of the best singers from thirteen countries to showcase themselves on one of the biggest live broadcasts… in the world (and yes, I typed that in a Jeremy Clarkson style voice). There are ballads, dance numbers, song of love and romance (or at least dreaming of a first kiss). There’s high energy pop and almost cinematical moments of classical singing. There’s that three minutes of presentation, props and pyrotechnics that make Eurovision stand out next to anything else in the entertainment world.

I’m about to drop myself into the middle of this, to meet the singers, the songwriters, the producers, the fans, the writers, and the organisers of this wonderful contest that the majority of people have never heard of. All of which will be set against the backdrop of Armenia’s capital city, Yerevan, which has a rich vein of architecture and history that was never crushed under the Soviet Union.

The thing is, four days ago, I wasn’t even going.

You can carry on reading “It’s Cold and there are Children Singing” by buying the eBook on Amazon.