Looking into the Crystal Ball and Baku’s Crystal Arena Written by Samantha Ross on October 31, 2011 | 6 Comments

What will Azerbaijan have in store for the Song Contest in 2012? The ESC Insider’s Samantha Ross decides to do some light-hearted Eurovision stargazing and wonder what’s going to be in store for everyone descending on The Land of Fire next May…

When the final votes were tallied this year in Düsseldorf, and the dust of another year’s Eurovision had settled, many people in the Press Centre and beyond were left with a lingering question… “Azerbaijan?”

Telling my friends and family back home in the US that I’d be heading out there next year was no less unnerving; after being met almost universally with blank stares and the repeated questions of “where the heck is that?”, informing people that I’d be spending two weeks in a nation sandwiched between Russia and Iran made more than a few brows furrow. Barring a Vladivostok-hosted event or future growth into more of the Arabian Peninsula, Baku 2012 will likely be as far eastward as the Eurovision Song Contest will ever go.

Many balk at the distance (it’s a five-and-a-half hour flight from Heathrow to capital city Baku), others at a possible language barrier (Azeri, most closely related to Turkish, heavily features the letter “Ə” …what?), others at the expected cost, and others simply at the unknown that awaits us in Baku. Call me an optimist, but I’m looking forward to seeing what Azerbaijan has to offer. I’ve had a few months to let my overactive imagination run wild, so here’s a quick list of what I expect from next year’s event.

Azerbaijan bills itself as “The Land of Fire” (heck, it was even the name of their first National Final, back in 2008).  I wouldn’t be surprised to see this imagery transfer over into the image building of next year’s Song Contest.  From putting in an artillery’s worth of pyrotechnics into the stage show to the branding of the contest itself (I’m thinking the slogan might be something like “Feel Your Heart Burn”, sponsored by Tums and Gaviscon…), the organizers of the contest might want to consider putting Içtimai-branded fire extinguishers in people’s swag bags or underneath the audience’s seats. 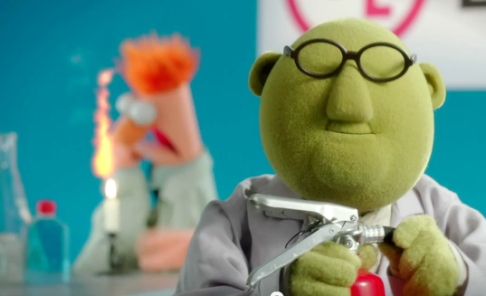 Hopefully any Azeri fire will be safer than this..

Without a doubt, Düsseldorf 2011 was very much “The Stefan Raab Show” (including the coffee concession stand in the press room- Ewan). He launched Lena to stardom in 2010, wrote a pair of the songs in the 2011 German National Final, hosted the big shows, rocked out with his house band The Heavytones during the opening number, and he probably branded all of those little apples in the Press Centre individually.  Wherever you were, there was his eerily smiling face, possibly clutching a ukulele.

Eurovision 2012, however, will be a family affair.  As we all know, Azerbaijan is run by President Ilham Aliyev, whose lovely wife, Mehriban, is the head of the Eurovision 2012 Organizing Committee. When delegations, fans, and press land in sunny Baku next year, we’ll all be landing at Heydar Aliyev International Airport, named for Ilham’s father (and presidential predecessor).  The cherry on top?  Ilham and Mehriban’s daughter, 25-year-old Leyla Aliyeva, is the Editor-in-Chief for Baku Magazine, .  If her English is strong enough, it wouldn’t shock me in the slightest if Leyla is somehow involved in next year’s production.  (Correction: the Leyla Alieva involved in Içtimai’s ESC coverage is, in fact, a different individual from the President’s similarly-named daughter.  Please pardon the error.)

If the Aliyevs have a cat that can ride a unicycle or a pet sturgeon that can sing ABBA songs on command, we may have found our interval act. 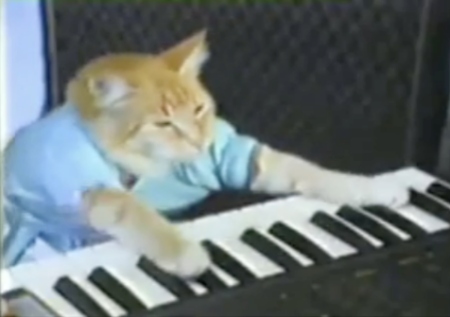 Speaking of the on-stage entertainment…

In 2011, Lena took a major risk and took the stage in Düsseldorf to defend her title.  Unlike the other times that champions have come back the year after their victories (Lys Assia and Cory Brokken both came in second-to-last when they returned), Lena ended up in a pretty decent 10th place. Will Germany’s success will herald the start of a new trend, and we’ll see Ell and Nikki attempt a two-fer?  (Maybe “Running Scared 2: Just when you thought it was safe to enter Eurovision again…“?)

Or will Içtimai go in a completely different direction, and put something on stage that is a bit more representative of Azeri culture? In 2008, Elnur and Samir flirted with traditional mugham in the face-melting “Day After Day”; using something based in that style might be the perfect way of saying “this is Azerbaijan, and this is who we are”.  As full-on mugham might be a bit much for the uninitiated to take, why not give it a fusion twist?  Last year, guitarist Çingiz Mustafayev impressed me during the National Finals with his ability to blend mugham, pop, and even flamenco into a pretty nice package…if Azerbaijan is going to use their time in the ESC spotlight as a way to show off their own culture while making it accessible to viewers in Brighton, Barcelona, and Belgrade, this might be an interesting road to go down.

Like other first-time hosts, especially those from the eastern half of the Eurovision world, Azerbaijan has the chance to really make their presence known on a wider scale than ever before. In the past, nations like Estonia and Latvia have had their time as Eurovision host basically double as advertisement, and tourism rates have skyrocketed since then.  (According to Statistics Estonia, for example, the number of hotel rooms nationwide has nearly tripled over the past decade.)

Now, I’m not specifically saying that hosting Eurovision is the golden ticket to increased tourism revenue, but having shiny images of your nation streaming into over one hundred million sets of eyeballs worldwide certainly can’t hurt.  Azerbaijan, in particular, will have even more at stake next year than just impressing prospective tourists: they need to impress the IOC. Baku is one of six applicant cities for the 2020 Summer Olympic Games (alongside Doha, Istanbul, Madrid, Rome, and Tokyo), with the official list of candidate cities to be determined sometime next May.  Needless to say, this puts even more pressure on Içtimai, Baku, and Azerbaijan itself to put on an impressive, inclusive, well-run show for the biggest music competition on the planet.

How do you say “party!” in Georgian, anyway?

Even though all focus will be on Baku next year, I’ll be keeping my eye on their neighbour to the west.  More than almost any other country, even surpassing Azerbaijan, neighbouring Georgia has used Eurovision Week as an advertisement for tourism.  For the past few years, press members have clamoured for invitations to the Georgian delegation’s official party, which often features traditional music, dancers, food, and enough tourism videos to make Rick Steves’s eyes cross.

Say the words “Georgian wine” to anybody there that night, and a slightly wistful look will cross their face, (likely followed by a pained expression as they recalled how they felt the next morning). Even beyond the party, most of this year’s press corps agreed that the Georgians handed out the best swag.  While many countries simply gave out promotional CDs or (if they were feeling generous) t-shirts, Georgia handed out boxes of local tea, silk scarves, and even bottles of wine to the masses (Some people remarked that they needed to get people liquored up a bit to appreciate “One More Day” but don’t say that too loudly near Ewan).

It wasn’t just promotion for the song; it was promotion for the nation itself.  Looking into my crystal ball, I can predict that Georgia will pull out all the stops for their 2012 promotion in Azerbaijan.  They’ll probably reserve some fabulous venue, where lovely ladies – all named Sopho – will pour unlimited quantities of delicious wine with unpronounceable names. 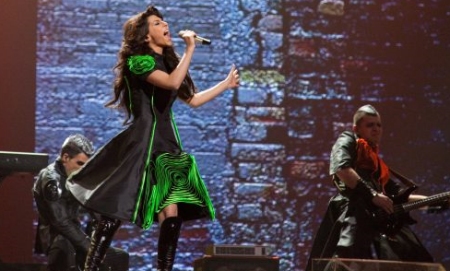 What do you hope/expect/fear to see next year?  Let us know in the comments!