How to write a Eurovision article for your newspaper Written by Ewan Spence on March 27, 2011 | 5 Comments

With the Eurovision Song Contest approaching, a lot of news desks are going to be looking for stories on the Contest. While they might be lucky to have a Eurovision fan on staff (not that amazing, sports desks have lots of fans of football on the football desk), the chances are that someone with no Eurovision background  is going to be asked to write 500 words in two hours, and have to rely on Google and the Internet.

If that someone is you, we here at ESC Insight would like to offer not only our sympathy, but also to help you through the process of writing a typical Eurovision article for the UK tabloid press… with our tongues very slightly in our cheek and the humour turned up to eleven.

First up, it’s time to introduce the Song Contest to your readers. How you write this will depend a lot on which newspaper you’re working for. The British red-tops like The Mirror and The Sun need more puns and wordplay, while readers of The Independent and The Guardian need a little bit of sarcasm and back-handed compliments. Remember that even if the public love the contest, you need to be a touch derogatory, potentially using the words kitsch and cheesy.

After this setting of the scene, it’s time to bring it up to date and talk about the entry from the United Kingdom, Blue. Before you write this paragraph call up the showbiz desk and check if anything is informally set up with Blue’s management or record label. Once you have that answer, go for either “its nice to have credibility” or “they’re a washed out, has-been pop band trying to copy Take That.”

Back on track after that multiple choice, you’ll need to balance the critique of Blue that keeps the showbiz team happy with a quote from a Eurovision expert to back up your premise. How about lifting from John Kennedy ‘O’Connor’s piece here at ESC Insight about this being the first time the UK public have never had a say in the song or performer? If you’re feeling very nice, you might even use it in the right context. No matter what, remind your readers that the UK hasn’t won the Song Contest since Katrina and the Waves in 1997.

Now, on to the main agenda. You’ve probably been given an angle by your editor, so state that clearly, and reply in the text with this catch-all phrase; “but it’s all about the politics.”

You’re going to need to gloss over Lena’s victory last year for Germany, but that shouldn’t be too difficult with a limited word count. And missing an open goal like this will guarantee debate in the comment and hopefully links coming in from angry Eurovision fans asking how Satellite took first place if it’s all about country biases.

Just to cover the bases though, point up some of the times that politics have been visible in the Contest; be it the simple douze points exchange between Greece and Cyprus, the cosy club of Balkan countries sharing the spoils; or even the rumours of Generalisimo Franco ‘robbing’ Cliff Richard of the win that went to Spain in 1968.

Now it’s time to expand the question you posed above in another paragraph of detail, and that means asking the picture desk to pop in a “typical Eurovision picture” to illustrate the article, break up the text on the web page, and bulk out the apparent length.

There are only three pictures that can be used. Choose from The Brotherhood of Man (for your “isn’t Eurovision rubbish” articles); Bucks Fizz (“nobody cares about the song – it’s all about the wacky dance, which the Briitish invented thirty years ago); or Verka Seduchka (if you need to have an air of superiority over other countries, or are writing in The Daily Mail). 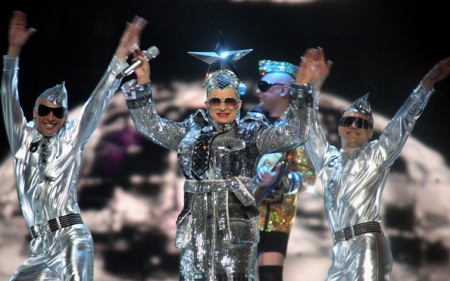 Relax, though, you’re not going to actually answer the question put to you. What you’re going to do is trawl the various Eurovision websites (here’s 100 Eurovision sites on the internet to choose from) for a few comments on the subject. You’re going to be able to lift a quote to cover any angle, so you can go for a balanced discussion article and negate the question, or you can back it up with some very forceful language. It’s rare to find Eurovision in total agreement on any subject – lucky you!

Time to close up the article. Do you want a nice positive spin to leave every one with a happy feeling about Eurovision? You can do that, talk about a constantly changing Eurovision and say that it’s in the process of re-inventing itself. How about something a bit more negative? Easy enough as well, write about how nothing has changed since the first Contest in 1956 (and ignore the fact that the underlying rules in football haven’t changed in over a century, yet everyone still loves the World Cup).

No matter how you approach it though, every Eurovision article has to finish with a question mark. So take your editor’s lead, repeat the question and simply add “Maybe this is the year we’ll find out?”

Now do you have any of your own funny tips for Eurovision writers to take on board? Help them out and leave them in the comments!