The Spotter’s Guide To ‘Eurovision Song Contest: The Story Of Fire Saga’ Written by Ewan Spence and Ellie Chalkley on June 25, 2020 | 4 Comments

As the release of Netflix’ Eurovision movie (the awkwardly long ‘Eurovision Song Contest: The Story Of Fire Saga’) approaches, Ewan Spence and Ellie Chalkley sit down with a review copy to talk about the film and the moments that Song Contest fans need to watch out for.

Is The Film Any Good?

If you were expecting a soaring epic with ‘Eurovision Song Contest: The Story Of Fire Saga‘ then you might have missed the memo. It’s a Will Ferrell film with a pretty straightforward plot. Every Chekhov’s Gun is obvious both in their placements and denouements, every expected twist that you guessed would happen after watching the first five minutes comes true, and no risks are taken at any point.

But the biggest question in the Eurovision Song Contest community is not “is it any good?” but “how does it treat the Song Contest?” In short, it treats the Contest with respect. We didn’t cringe massively over the presentation, nor did we want to throw rocks at the screenwriters during any of the scenes at the Contest.

That doesn’t mean the Contest on screen reflects an actual Contest. This is not the Eurovision Song Contest, this is a standard three-act drama that has the Song Contest as a backdrop. Packing in a National Final, a Semi Final, and a Grand Final; alongside as many elements of Joseph Campbell ‘The Hero’s Journey’ as possible in 123 minutes means that some short cuts have to be taken.

In a sense the short cuts add a layer of comedy for the community. To take the portrayal of the Semi Final; in this world the Big Five are in the Semi Finals, and the jury and televote points are announced as if it was the Grand Final. There are countless other tiny moments – the wrong flags being used, Graham Norton has a huge commentary booth and all the other commentators and bloggers are squashed onto a bench – perhaps in years to come Eurovision fans will take great delight in midnight rewatches and Sing-A-Long-A-Fire-Saga but it’s not a film that calls for an immediate re-watch.

Just as ‘Blades of Glory‘ used ice skating as a backdrop in a comedic setting, ‘Talladega Nights‘ used NASCAR, and ‘Bewitched’ used, err, ‘Bewitched‘, ‘Fire Saga‘ in essence laughs with the Song Contest as the story takes place, rather than laughing at the Song Contest.

It’s just a shame that, as a Will Ferrell film, it’s rather… pedestrian and by the numbers.

With Eurovision pushed into the background for most of the film, the moments for the Eurovision community to enjoy are focused in specific areas rather than scattered throughout the film. So here’s our traditional ‘Spotter’s Guide’ for ‘Fire Saga’, and obviously some light spoilers now follow.

Of Course They Start With Abba

Because it’s a film about the Eurovision Song Contest. For almost everyone watching that means Abba. And for most of the people watching, Abba can also mean Mama Mia, leading us to Pierce Brosnan in a supporting role. It’s a nice bit of circular film connections.

Thankfully Brosnan does not sing in ‘Fire Saga‘…

Eurovision fans will of course be ahead of this when April 6th 1974 pops up on screen. Eurovision fans will also be wondering why the Icelandic population is watching the Song Contest with the UK commentary from David Vine. Also, the crate of cold beers that gets passed around is 100 percent illegal. Beer was only legalised in Iceland on March 1st, 1989.

Hold On, What About ‘Volcano Man’?

The heavily trailed track and musical video for ‘Volcano Man‘ is not Fire Saga’s entry to the Eurovision Song Contest. It’s more like a Bond Theme that introduces the film, but is never heard again. Instead the song is ‘Double Trouble‘ – but not this ‘Double Trouble‘…

How does Fire Saga’s ‘Double Trouble‘ compare to the Eurovision greats?

The intro is classic Nordic pop – and it feels like they were aiming for Euroband’s ‘This Is My Life’ by way of Paula Seling & Ovi’s ‘Playing With Fire‘. Even autotune can’t stop it from taking a turn for the worse when Will Ferrel joins in on the chorus.

Let’s take a look at the staging. An act with as little support from their broadcaster as Fire Saga are depicted as having would not have been able to enlist the support of a star production designer like Kevin Swayne (I like to imagine Will Ferrel being excitedly told that “someone has a Sasha Jean Baptiste staging!” in Lisbon and him going, oh, right, that’s good is it?) and certainly wouldn’t have had expensive props that would have required several layers of risk assessment.

Just a few things of note. ‘Fire Saga‘ portrays a Eurovision world where Iceland doesn’t seem to like the Eurovision Song Contest and RÚV’s management would rather echo that episode of ‘Father Ted‘ than push for a victory. Could this be the most unrealistic part of the film?

The Iceland portrayed in the film isn’t the one we know. It’s a nation that seems sartorially and artistically stuck in the 1970s. You couldn’t imagine the Iceland of the film producing Reykjavikdeatur or Une Misere or Hatari. There are a lot of natural, wholesome brown lopapeysur around, which people do wear, but you’re more likely to see a young Icelander in a technical parka or puffa jacket as outerwear. 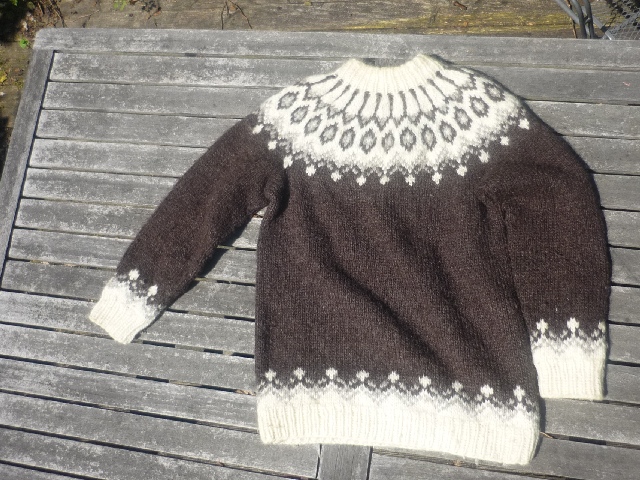 A picture of a lopapeysur

The Songvakeppnin final is one of the TV events of the year, and while I’m sure there are some people who don’t watch it, widespread indifference to the contest doesn’t seem realistic. And in the event of a disaster befalling the whole cast and crew of Songvakeppnin, it seems highly unlikely that RÚV would have the personnel or the heart to send anyone to the Contest. We remember the story of Sjonni’s Friends coming together to sing ‘Coming Home’ after Sigurjon Brink, the songwriter, died days before he could compete in Songvakeppnin. What happens in the film is… not like that.

A Postcard To Edinburgh

Either of these are more likely than Salvador Sobral busking in Scotland’s capital.

They Took Him Away

Good news! Jon Ola Sand is in the film! After a fashion…

The First Sight Of The Stage And Arena

Every Eurovision Song Contest fan who has been on the ground knows that the Fire Saga’s awe and wonder at their first sight of the stage and arena is one hundred percent accurate.

If you like your movies with lavish, extravagant attention paid to costuming and production design (and you’re a Eurovision fan so, yes, you do) then you’ll enjoy the costumes and styling of the whole backstage area. The costumes for the Croatian, Belarussian Finnish artists look amazing, there’s a Greek dressing gown that’s beyond belief and don’t even get us started on the looks for the Russian Delegation Party…

If the production team landed the ‘first stage’ moment, they almost nailed a delegation party – the male/female ratio doesn’t quite ring true to life. As for the ‘Song-A-Long’, well this is the part that is the biggest indulgence to the Eurovision community. Just sit back and see how many of our favourites you can spot.

And with the pace-destroying fan-service complete, it’s back to ‘this is a Will Ferrell film…’

The Rehearsals And The Rules

They are, frankly, all over the shop.

Does this matter to the film? In terms of servicing the storyline and the fracturing of Fire Saga, it works. But in terms of the Eurovision Song Contest, it takes so many liberties that it feels like someone saw a highlights reel of a single Contest before writing the script.

Where to start? How about the multiple changes to the backing tracks, countries with seven performers on stage, language and lyric changes in the Semi Final, and there are even more transgressions in the Grand Final. RUV in the film is facing a ridiculous number of financial penalties here, and probably a disqualification. And as mentioned previously, the Semi Final appears to be following the format of the Grand Final.

A script editor working alongside someone knowledgeable about the Contest should have been able to accommodate the fact and the fiction. Imagine watching a film about football and the match is portrayed as running for 35 minutes in each half, both teams get 17 substitutes for the 9 players on the pitch, and home goals count double. You want to watch Pele, but all you can think is Sylvester Stallone is the goalkeeper.

A Man In A Hamster Wheel

But everything following that would never have happened… the broadcast would have switched to the backup tape and Henric von Zweigbergk’s booming voice would yell “Stop!‘

Nope, we’re not going to spoil the final act, but what goes unsaid in the conversations between Sigrit and Lemtov, and then Lemtov and Mita, is quite explicitly political for something that got signed off by the, ahem, 100 percent non political event that is the EBU’s Eurovision Song Contest.

And Now, For Viewers in Scotland…

With Edinburgh hosting the Eurovision Song Contest, there are a lot of landmarks to watch out for, and hilarious juxtapositions.

The Songvakeppnin afterparty is in Newhaven harbour; the Elves live in Salisbury Crags; the 90 seater Bedlam Theatre has been replaced by the 14,500 seater SEE Hydro… (which is in Glasgow); the Usher Hall (Eurovision 1972’s venue) is never shown; you can see where Pif Paf Blog’s Ross Middleton works; the dramatic driving scene is as hilariously geographically consistent as the opening to ‘Trainspotting‘, the Starbucks nearest to the fountain is in the other direction, and of course Edinburgh’s Eurovision stage which is inside Glasgow’s Hydro is actually in Tel Aviv.

Here’s a fun game… see how often you can call out “Edinburgh! Glasgow!! Tel Aviv!!!” in quick succession… fun for all the family…

Finally… if Edinburgh is hosting the Eurovision Song Contest, I’m pretty sure that not only would the hosts be Scottish, but it would be Jackie Bird and Des Clarke up front, and Susan Calman in the green room.

‘Eurovision Song Contest: The Story of Fire Saga’ is available from June 26 2020 on Netflix.

4 responses to “The Spotter’s Guide To ‘Eurovision Song Contest: The Story Of Fire Saga’”