Black Square: It’s Got A Lot Of Layers Written by Ellie Chalkley on February 14, 2020 | 2 Comments

Over in Ukraine, three sisters are examining the nature of art, and they’re doing so with beautiful lyrical flow, humour and harmonies to stop you in your tracks. Plus, they start it all off by quoting Janet Jackson. 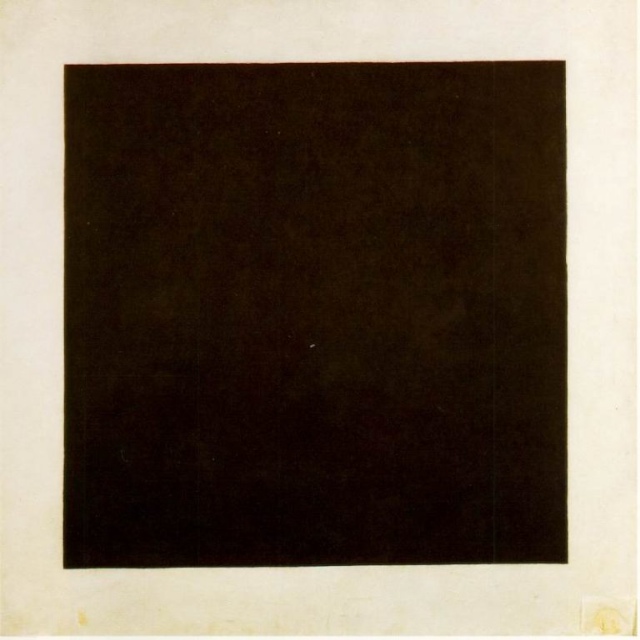 The Black Square that they’re singing about is a specific painting. Black Square is an oil painting of a single, medium-sized black square in the middle of a canvas by Kyiv-born Kazimir Malevich. The piece marks the transition point between traditional illustrative painting and contemporary art.

Malevich,who was born in Kyiv in 1879, graduated from art school in Moscow in 1903, at a time where it must have seemed like the boundaries of what constitutes ‘art’ were expanding without limit. In his early career he adopted and played with many of the styles that were popping up – impressionism, cubism, fauvism, – but also developed his own style of ‘suprematism’ which was based around the idea of trying not to represent objects, but to represent the supremacy of feeling that they represented. For a fantastic exploration of the history and significance of Malevich’s painting, give this episode of the podcast ‘Art History For All‘ a listen.

When I asked the band how they responded to the painting, Betty, Miriam and Siona said,

“Black square is a revolutionary work of art, that shocked the whole world with its concept. It evoked the thinking process, made people find the answer and question the art in general. For us it celebrates the differences of opinions, tolerance, freedom and art. We love that! And the fact that Kazemir Malevich was from Ukraine and made it to the world level, inspires us.”

The Malevich painting was extraordinary because it challenged the nature of art. In the verses of ‘BLCK SQR’, FO SHO ask ‘is this art?’ and mention Black Square and a number of other specific artworks.

Notably, they mention the Mona Lisa, an artwork made of “a giant piece of human faeces” – something that echoes the infamous tinned poo by Piero Manzoni – and via the brief sequence referencing an auction topping out at $75million, Mark Rothko’s colour painting Royal Red Blue. They go back and forth questioning what makes something art. Is it art because a human resonates with it? Is it art because it hangs in a museum? Is it art because it is financially valuable?

But there are more layers to the painting than the celebrated icon of modern non-representative art – modern examinations of the piece have discovered details under the surface of the painting, including an erased message that alludes to the title of a racist caricature. The politics of race in Ukraine have intersected with Eurovision before – notably with Gaitana facing racism from ultranationalist politicians for daring to represent her country on the world stage. The FO SHO sisters, who were born in Ukraine to parents who originally came from Ethiopia in the 1980s, have also faced negative comments for bringing their hip hop and R&B to Vidbir. They’ve had to address attacks on their music and even their status as Ukrainians on their Instagram; something that has clearly hurt them.

Hello everyone! Since being a #eurovision national team, we are being asked every day whether we are immigrants.? Are we foreigners? We, the three sisters who were born and raised in Ukraine, went to school and university, just like every Ukrainian. We have Ukrainian citizenship since our birth, we have learned English like everyone else, so these questions and comments are very strange to us. If we sound branded … it’s just because we’ve worked so hard and wanted to be world-class. We want the Ukrainian world to understand us. And the song, we have just about Ukrainian art. Thank you for understanding.

The questioning of an artist’s identity as Ukrainian is something we’re familiar with in the Eurovision selection process, and it’s already clear from the change in the rules that this year’s edition of Vidbir has an even stronger emphasis on Ukrainian national identity than usual. The make up of the first semi final, including two bands that mixed traditional Ukrainian folk vocals with dance beats, the contemporary classical of Katya Chilly and the pastoral bandura sounds of KRUTЬ also shows that UA:PBC are keen to showcase modern Ukrainian culture. FO SHO declaring Kasimir, a ‘dude from Kyiv’ to be their inspiration is another facet of this soft nationalism.

2 responses to “Black Square: It’s Got A Lot Of Layers”