Make Your Way To Minsk: The Top Five Things To See Written by Sharleen Wright on November 18, 2018

The 2018 Junior Eurovision Song Contest returns to Belarus for a second time during its 15-year history.  But for ESC Insight, it is our first foray to the land of White Russia.  What lies ahead?  In preparation, our resident travel expert, Sharleen Wright, has prepared a series to give you all the information you need to make the journey. In this last article, she outlines the Top 5 must-sees whilst visiting Belarus –

Belarus is currently buzzing as a new destination to visit with its relaxed visa laws. The capital Minsk has a good art and cafe scene, and a party atmosphere in the evenings for the locals. Centered around it’s restored Old Town and town hall, revellers erupt out of beer halls and fashionable cocktail bars till late in the night.

But it’s not all about drinking and Junior Eurovision; both the capital and the rest of the country has much to offer for a discerning tourist.

The Belarusian State Museum of the History of the Great Patriotic War was the world’s first museum to tell the story of what most know as World War II.  It is one of the most important and biggest war museums in the world, and was actually originally curated during the years of Nazi occupation – starting in June 1942.

The museum has over 8,000 exhibits that tell the story of the ‘Great Patriotic War’, with a further 145,000 rarities in the museum’s storage. They were collected during military operations in Eastern Europe and Germany and were presented by embassies of various countries in time of peace.

Ultimately, the museum aims to tell the story of Belarus during that period when more than 3 million people died, including 50,000 partisans and underground fighters. Throughout the country there were 250 death camps, including the infamous Trostenets, one of the largest after Auschwitz, Majdanek and Treblinka.

It is located in a specially built area in the central square of Minsk (Oktyabrskaya Square), and also has a unique open-air exposition of military equipment and weapons.

The tickets cost from 6 to 10 BYN (for using photo and video cameras).  Opening hours are from 10am to 5.30pm, except on Mondays and national holidays when it remains closed.

To get a further sense of what to do in Minsk, take a look at this video from travel blogger Kyle Le –

This is the second most visited museum in Belarus, behind the Great Patriotic War Museum.  It highlights ancient crafts and technologies, with tourists offered the opportunity to step back in time and interact with craftsmen, cooks and folkspeople.  You can purchase items and also taste test the likes of bread, vodka, pickles and honey for free.

It is located 40 kilometres from Minsk, in a picturesque location near the river Ptich; making for a wonderful day tour opportunity.  The entry fee for an adult is from 10 BYN per person.

Whilst these are two separate attractions, they are generally visited in conjunction with each other.

Located approximately 100km from Minsk, fairy-tale Mir Castle, is an impressive architectural monument that is included on the UNESCO World Heritage List. Dating back to the 15th Century, it is a combination of Gothic, Baroque and Renaissance architecture, which used to belong to several aristocratic families.

The magnificent Nesvizh Palace is the former residence of the aristocratic Radzivilli family, located on the grounds of a beautiful park. The complex once numbered around 170 rooms, with a series of underground passages connecting it to the town’s monasteries. Today the exposition of the Palace includes more than 30 exhibition halls, including Prince’s apartments, Golden and Star halls, Hunter’s hall and others. 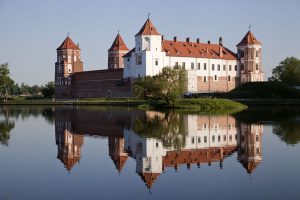 The best way to reach Mir and Nesvizh is via pre-arranged day tour that includes transport and entry.   Operators Viapol offer a regular group departure to the locations every Thursday, with English-speaking guide, transport, entry and lunch for just 105 BYN per person.

Brest is a city in southwest Belarus on the Polish border, dating back to the 14th century and has a rich Jewish heritage.  It is known for two main things – its fortress and its national park.  You can reach it via a 4-hour train ride from Minsk, so well worth an overnight exploration from the capital.

The 19th-century Brest Hero Fortress is a celebrated site of Soviet resistance during WWII.

In June 1941, heavy fighting between the German and Red Armies occurred, with some 2000 people killed.  The defence of the fortress by the Red Army lasted more than a month, and it is now celebrated throughout Belarus for the heroics.

The facility itself was erected in 1965, including a museum detailing the armed heroes of the region, a bullet-riddled Kholmsk Gate and the huge Thirst Monument, depicting a parched soldier.   Walking the grounds of this great fortification is a truly moving experience.

It is free to enter the complex.  It can be reached in around 25 minutes by walking from the centre of Brest town, or catching one of the city buses travelling West from the Brest central station. 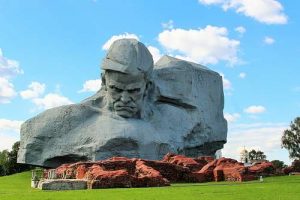 Belovezhskaya Pushcha National Park (Belavezhskaya Pushcha) is an ancient woodland straddling the border between Belarus and Poland, located 70 km north from Brest. It is one of the last and largest remaining parts of the immense primeval forest which once spread across the European Plain. It is a UNESCO World Heritage Site with mammals such as bison, wild boar, elk and wild horses.

In addition to the rare nature spotting opportunities, you can also visit the Father Frost Estate, which celebrates all things Christmas.  It is decorated with hand carvings and sculptures of fairytale characters, and strings of lights, which creates a festive atmosphere.