Make Your Way To Minsk: How To Get To Belarus Written by Sharleen Wright on November 14, 2018

The 2018 Junior Eurovision Song Contest returns to Belarus for a second time during its 15-year history.  But for ESC Insight, this is our first foray to the land of White Russia.  What lies ahead?  In preparation, our resident travel expert, Sharleen Wright, has prepared a three-part series to give you all the information you need to make the journey. This first piece offers tips on how to get to Belarus.

The capital of Belarus, Minsk, was selected in late 2017 as the chosen host location for the upcoming 2018 Junior Contest. Unlike previous hosts, Belarus launched a bid specifically to host, as per the rules where it is not necessary for the winning country of the previous contest to produce the following year.

Belarus had already proven itself able to be great hosts off the back of the 2010 show hosted in the same location. However, the anticipation is that this year’s event stands to be far bigger and better than its previous show. Whilst broadcast technology has improved, and the number of competitors has increased, the eight years that have passed have also witnessed Belarus quietly become a new cool destination to visit, with its relaxed visa requirements and a new hub for events and summits.  The global travel publication Lonely Planet has even listed it as a top 10 country to visit for 2019.

Last June led to the Government announcement of a new 30-day visa-free regime, allowing visitors from 80 countries to come to the previously bureaucratic nation, as long as entry and exit is via Minsk Airport from a country other than Russia.  This new more open policy has allowed it to be awarded the opportunity to host the 2019 European Games, as well as encouraging our own team to finally travel and discover the destination.

Minsk is serviced by a limited number of airlines; mainly those based in the region including Air Baltic, Turkish Airlines, LOT Polish, Aeroflot from Russia.  Further afield, there are available international connections through Etihad and Air China.  It’s national carrier – Belavia –  flies to most major European destinations such as Amsterdam, Berlin, London, Paris and Rome. The airport is located some 42 kilometres from the city centre, taking approximately an hour to reach by taxi or transfer, and longer on the regular public bus services connecting it to the centre of town.

Minsk Arena is a modern venue located on the outskirts of the capital city, just 8 kilometres from the central station.  Opened in 2010, one of the first large scale event it hosted was the Junior Eurovision Song Contest in November that year and has since gone on to stage concerts for Depeche Mode, Jennifer Lopez and Shakira.

The arena holds 15,000 people, however with the staging for Junior Eurovision 2018, has been reduced to 12,000 people.  Many of the tickets have already been sold and a number of seats allotted to local children, schools and charities.

There are still some limited tickets for both the dress rehearsal and final, mainly on the dancefloor, at: https://www.tvr.by/special/detskoe-evrovidenie-2018/

Whilst it’s a relatively new city for tourists to venture to, Minsk already has a large range of accommodations, with something for everyone. There is a small smattering of new hostels, good 3-star communist-chic accommodations, all the way up to modern business-catering hotels and 5-star well-known chains.

For Junior Eurovision, locations near the Arena include Hotel Sport Time (3 star), Victoria Olimp (4 star) and Minsk Marriott (5 star). All have rooms still available throughout the week leading up to the Contest, but keep in mind that they are not central city hotels.

AirBNB has also reached this part of the world, so those who want to self-cater can do so through renting an apartment.  Costs generally remain low in comparison to other cities, so no matter what your expectations, tastes and location preference, you should find something appropriate and affordable. 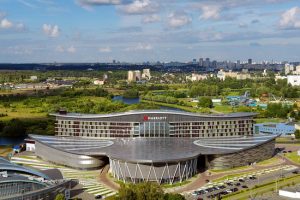 Like most of its East European counterparts, Belarus is a country with a well-developed transportation system; fast, efficient and extremely cheap. There is a railway system connecting the whole country, and within Minsk, a metro system of three lines.  It also has intercity coaches, city buses, trams, trolleybuses and minibus services.

The best way to reach the Minsk Arena from the centre of Minsk is to use the Number 1 bus service, which departs every 15 minutes, and takes approximately 30 minutes to travel between the Central Station stop and the Arena.  The cost of 1 trip is 0.60 BYN on bus, trolleybus or tram, or 0.65 BYN on the metro.

Transport tickets can be purchased at kiosks, from metro station vending machines, from a conductor or a driver.  Pre-purchasing tickets is cheaper, and you can buy single, day or multiple travel/seasonal tickets to save even more money.

It is highly recommended to purchase a ticket as fines are issued if you are caught travelling without one.  Penalties for an un-ticketed journey can be up to 25 BYN.

The Junior Eurovision Song Contest will be held on Sunday 25th November in Minsk, airing through selected broadcasters and online from 16:00 CET.  Join us on ESC Insight for our week-long on-ground coverage of the event from 19 – 25 November.