All the Streets of Love and fourteen more classics Written by Ewan Spence on September 12, 2011

Think back to Moscow 2009 and the brightly coloured fun that was Portugal’s entry. From folk band Flor de Lis, Todas as Ruas do Amor made it to the final, and gave Portugal one of their strongest results in years. It took a while for their début album to come out, and then a bit longer for me to get a hold of it, but now it’s here, and I’m a happy reviewer.

The music itself is very much Mediterranean folk, with sultry vocals, a sway from a cool evening wind, and the rhythm of the tide in the background. You know that feeling of walking barefoot on warm sand as the sun sets in the background? That’s Signo Solar.

There is excitement here, is a quickening of your pulse, but it’s all so wonderfully pitched to not be overpowering as the band shifts tones and structure under your feet.

It’s also a nice change to listen to an album from a Eurovision performer where their Eurovision entry fits in with the fabric of the album. Todas as Ruas do Amor belongs on this album as much as any of the other fourteen tracks – it’s not been tacked on to get the sales. To be honest, if the Portuguese folk music scene is like the UK, Flor de Lis are in this for the music, not the money. 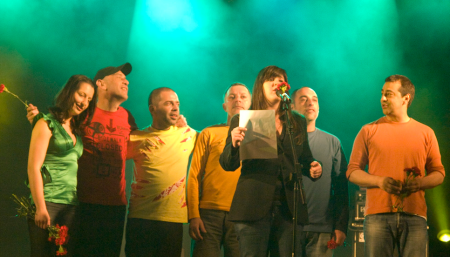 Daniela Varela’s voice is even more precise here than it was on stage in Moscow, but perhaps being in more familiar surroundings while recording the album has allowed Flor de Lis to really work on bringing out her distinctive staccato style of vocals. It fits in with the sharp percussion and backing, and leaves the rest of the band to drape the music around the central vocals, while never overpowering her.

The word that springs to mind for this album is delicate. Not in a breakable and fragile sense, but in small, intricate details. being able to keep looking closer and closer and finding, or in this case, hearing, more little facets to the music. It’s incredibly safe as well, but not in a bland way. It bounces around, it keeps things moving, the music is constantly shifting… yet at the same time there is no danger, no threat or anything looming over the music, waiting to crescendo down on the listener.

And in a lot of circumstances, that’s exactly what I need from my music. To provide a contrast through the day to work along to, to exercise and jog along with, to keep a smile on my face, and to keep me going with musical smiles, hugs, and bright colours.

That’s what Signo Solar delivers. Now it’s clearly not for everyone, and if you have to ask if it’s for you, just think back to your reaction to Flor de Lis in Moscow. That’s the same reaction you’ll have to their album. Naturally, I love it!

Signo Solar, by Flor de Lis, is published by Iplay and is available as .